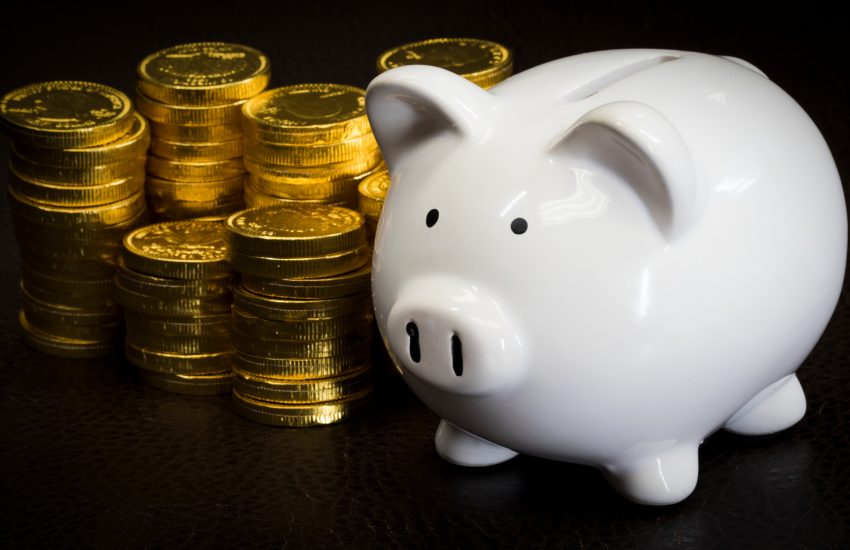 Over the next several weeks, investors will be heavily focused on any news or data which could impact the timing of future interest rate increases. Almost nothing moves the financial markets like major interest rate news.

For a change, we could have new market-moving info on our hands for the first time in many months.

You see, the Fed originally had a plan to increase rates three times in 2017. Their thought was the growing U.S. economy could sustain three small rate increases. The purpose behind these increases is to keep inflation from increasing too high or too quickly. (Two of the three increases have already happened.)

However, recent economic data suggest inflation isn’t of any real concern right now. In fact, it may even be too low (a topic which always sparks a ton of debate).

The key is, the Fed wants to avoid deflation at all costs, even at the risk of inflation rising too quickly. So, with inflation concerns shelved for the moment, the Fed may not have a reason to raise rates just yet. It’s even possible we won’t see another rate hike in 2017.

As you can imagine, whether or not the Fed raises rates again in 2017 is a big deal to short-term investors. That’s why every bit of news from the Fed and any major economic news will be analyzed ad nauseam for clues on when the next hike may occur.

The timing of the next rate increase could have a major impact on the price of gold. As an alternative currency, gold prices will move quite a bit based on what US interest rates do. As such, there’s reason to believe gold could be more volatile in the coming weeks (and maybe months).

At least one big trader believes gold miners could be impacted heavily all the way until next year. Of course, gold miners move pretty consistently with gold prices. And, this trader just spent a pile of cash betting miners as a group will be far away from current levels by this time next year. 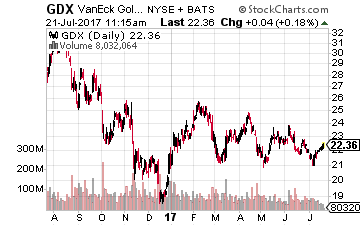 More specifically, the trader purchased a large strangle in the VanEck Vectors Gold Miners ETF (NYSE: GDX) expiring in June of 2018. A strangle consists of an out-of-the-money call and out-of-the-money put purchased simultaneously in the same expiration period. In this case, with the ETF at just over $22, the buyer purchased the 18 put and the 30 call. That’s a very wide strangle for such a low underlying price. In fact, with the cost of the trade at around $1.50 per strangle break-even points are all the way at around $16.50 and $31.50.

The strangle buyer clearly believes the next year is going to be volatile for gold and gold miners. The trader purchased 9,300 strangles, so is spending nearly $1.5 million on this trade. In other words, this is no idle bet.

Given what’s going on with interest rates, it doesn’t surprise me that at least one big trader is betting things are going to get interesting with gold over the next year. However, if you believe gold is going to move, you could take a more direct and shorter-term approach. 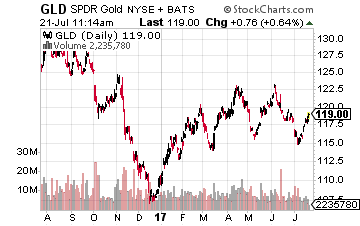 For example, the SPDR Gold Shares ETF (NYSE: GLD) looks like it could easily be on the verge of a big move either direction. This direct play on the price of gold could also be a good choice if you believe the precious metal is going to move in the next several weeks instead of months.

As of this writing, you could purchase the September 1st (of this year) 116.50-119.50 strangle in GLD for about $2.00. That’s bit more expensive than the GDX strangle from earlier, but it’s far closer to the money. Break even points would be at $114.50 and $121.50 – both very reachable levels in the next month if any economic surprises occur.