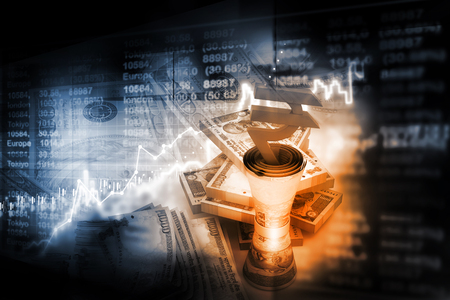 One of the first purchases ever made with bitcoin was pizza.

Those same coins used to order pizza would be worth $27 million today.

Back then, the cryptocurrency community was tiny. There were no exchanges.

Today, around $2 billion worth of bitcoin is traded daily. That’s a higher volume than that of the SPDR Gold Trust (the most popular gold ETF), as recently noted by Bank of America.

You can spend bitcoin at an increasing number of places. But as I’ve mentioned before, that’s not the real purpose.

Bitcoin is digital gold. You hold it, and it appreciates in value over time as it spreads to more users.

The cards are lined up perfectly for bitcoin. Its primary competitors are all vulnerable to disruption.

Then there’s bitcoin, the best-performing asset ever, up 45,000X or so. It’s the only asset that can be easily sent around the world, safely stored on a USB stick in your pocket, and turned into cash almost anywhere.

Bitcoin is “mined” by very powerful specialized computers. It takes a lot of energy to do this cryptographic work (which helps secure the network). Bitcoin mining has become an industry, with hundreds of millions of dollars being spent on equipment and energy.

Bitcoin is also decentralized. It runs on hundreds of thousands of computers all over the world. That means you can’t shut it down. The network cannot be seized or easily blocked.

Bitcoin evolves over time. Changes to the software can be proposed by anyone and are voted on by bitcoin holders. Miners have significant influence as well.

Bitcoin’s biggest problem is that it can’t handle today’s transaction volume. The network’s jammed, so transactions can be slow, often taking hours to confirm.

Multiple fixes are in the works and are being fiercely debated by miners and owners.

But I’m not too worried about this. It’s in everyone’s best interest to fix the issues, and some of the smartest people in the world are working on these problems.

That’s another thing about bitcoin – it attracts math geeks, techies, libertarians and alternative investors. This is a good (and large) demographic for an asset to have.

Bitcoin’s base is expanding. It used to be hard to buy bitcoin, which restricted growth. Not today. It takes just a few minutes, and you can pay with a credit card or a debit from your bank.

In the coming days, we’ll have a detailed 10-page cryptocurrency report coming out. It has four specific coins I’m bullish on (one of which was up 25% yesterday).

All members of First Stage Investor will get access to it. My latest presentation, which includes the aforementioned cryptocurrency report AND four coin plays, will hit your inbox in the next week or so.