U.S. equities pushed confidently higher on Tuesday, the first trading day of the new year, resulting in the best kickoff for the tech-heavy Nasdaq since 2013. Bitcoin was hot. Gold well bid. But bonds were slammed, pushing up yields, in a possible sign that inflation and economic growth expectations are rising and will put further pressure on the fixed-income market.

In the end, the Dow Jones Industrial Average gained 0.4%, the S&P 500 gained 0.8%, the Nasdaq Composite gained 1.5% and the Russell 2000 gained 0.9%. Treasury bonds declined, the dollar weakened again, gold gained 0.5% for its eighth consecutive gain and crude oil lost 0.1% after a run of strength.

Energy stocks led the way, in what could be possible sector rotation as crude oil tests above the $60-a-barrel threshold for the first time since 2015. Utilities were the laggards on yield pressure, falling 0.9%.

Netflix, Inc. (NASDAQ:NFLX) gained 4.8% after being upgraded by analysts at Macquarie noting changing consumer preferences to ad-free television and the impact of a second round of price increases. Citigroup analysts believe there is a 40% chance the company is acquired by Apple Inc. (NASDAQ:AAPL).

Nordstrom, Inc. (NYSE:JWN) gained 3.7% on an upgrade at JPMorgan on expected tailwinds from stock market gains and tax cut stimulus. On the downside, Sirius XM Holdings Inc. (NASDAQ:SIRI) lost 2.9% on a downgrade from JPMorgan on increased royalty costs.

On the economic front, the Market U.S. Manufacturing PMI came in slightly better than the flash reading, indicating the strong pace of factory activity in 11 months. Job growth was at the strongest since September 2014. And Eurozone activity increased to its best level since the survey began in June 1997.

With the books closed on 2017, the die has been cast: It was a record year, with stocks rising on a total return basis in each and every month for the first time in history.

For now, the consensus on Wall Street is that the uptrend will continue.

Goldman Sachs is looking for “rational exuberance” in 2018 on a combination of strong GDP growth, low and slowly rising interest rates, and profit growth driven by the recently passed GOP tax cut legislation. JPMorgan says investors should “Eat, drink, and be merry” in the new year on higher consumer spending and an even tighter labor market.

But others, including Societe Generale and Bank of America Merrill Lynch, are sounding the alarm. The former is looking for the S&P 500 to drop to 2,000 by the end of 2018, a loss of 26% in what would be a bear market decline.

The latter, courtesy of strategist Michael Hartnett, fears a 1987/1994/1998-style “flash crash” within the next three months caused by rising interest rates. 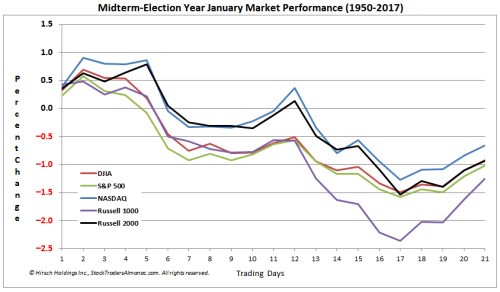 Checking in with seasonality, the folks at the Almanac Trader note that January has had a volatile reputation since 2000, with 10 of the last 18 years featuring nasty declines starting with the 5.1% pullback that kicked off the dot-com collapse. January 2009 featured a 8.6% loss that was the worst January on record going back to 1930.

Mid-term election year performances were also tepid, as shown above. SentimenTrader notes that options traders are betting heavily on a spike in volatility in the coming weeks. And these folks tend to be right at extremes.