Bitcoin… For the vast majority of people, this original coin has long been synonymous with cryptocurrency.

Indeed, bitcoin was basically the only game in town until recently.

As you can see from the chart below, bitcoin accounted for roughly 85% of the crypto market one year ago. 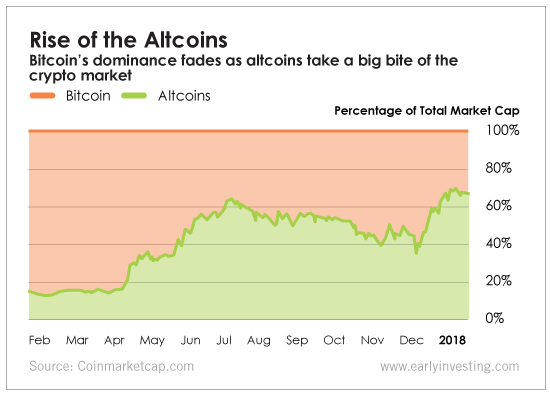 Today, bitcoin makes up only 34% of the $500 billion-plus cryptocurrency market. New competitors such as Ethereum, Ripple, Dash, NEM, Monero and IOTA have emerged to grab big chunks of the market.

And hundreds of even smaller coins combine to make up around 25% of the market.

Collectively, everything that’s not bitcoin is referred to as the “altcoin” market.

While bitcoin has lost significant market share to altcoins, its value still skyrocketed from around $1,000 a year ago to around $11,000 today.

Over the same time period, altcoins have soared even higher than bitcoin, rising from just a few billion dollars combined to around $360 billion today.

In my view, these developments don’t represent the fall of bitcoin. We still need bitcoin as a reserve cryptocurrency, a secure rock in the crypto world. Instead, what we’re seeing is the rise of crypto as a new type of investment.

This past year has been a chaotic (and wildly profitable) one for crypto investors. And we’re beginning to see the type of market I envision as being necessary for crypto to grow into one of the largest global asset classes.

I’ve known for years that we need more than just a few big coins for crypto to thrive.

We need fierce competition among hundreds of coins, all of them using the power of open-source software to innovate and create amazing technology… and growing through the power of network effects and viral organic growth.

Today we’re seeing exactly that. There are now more than 30 separate coins with market capitalizations (total value) of more than $1 billion. Each has its own community of users, developers and supporters.

Hundreds of unique cryptocurrency models are being tested in the wild today. It’s an innovation bonanza, much like we saw in the early days of the internet.

Crypto today is a global phenomenon the likes of which the world has rarely seen.

With the rise of crypto comes inevitable scrutiny from governments and central banks around the world.

For more than a century, these centralized powers have had complete control over monetary systems. They won’t give that up easily.

They claim to be looking out for the welfare of their citizens, but I believe they see crypto primarily as a threat to their monopoly on money.

Imagine where the crypto market would be today if China hadn’t done that. We’d probably be 2X higher than we are today.

I believe China will eventually reverse its ban once reasonable regulations are finalized. If and when it does, watch out …

But we know that the type of government pushback we saw in China is inevitable. It’s likely that it will happen in other countries.

However, we’re seeing some encouraging signs.

South Korea, one of the world’s largest cryptocurrency hubs, recently announced it was considering a crackdown and possible ban on crypto trading.

Korean citizens were outraged. More than 200,000 citizens signed a petition demanding that the government pull back on its crypto crackdown.

And its government appears to be listening. As reported by The Wall Street Journal…

Hours later on the same day, a presidential office spokesman walked that back, saying that abolishing cryptocurrency exchanges was only “one possible measure” that didn’t represent a “final” decision.

Many young Koreans see cryptocurrency as a hopeful development for the future during a time of high youth unemployment and stagnant growth. And they’re not alone.

Worldwide, a new generation of investors desire something other than the traditional investment options.

For many of us, cryptocurrency is a big part of the answer. It’s a hedge against central banks printing money. A unique new asset with the power to transform financial markets through increased efficiency and decentralization.

In short, we view cryptocurrency as a rare beam of light in an often crooked and rigged financial world. Governments and banks will try to ban or kill off crypto, but we’re not going to take it lying down.

Crypto is this generation’s contribution to true free market capitalism. It offers a chance to revitalize our stagnant monetary and financial systems.

As I often say, crypto is the future of money. Let’s encourage our elected representatives to treat it as such.

Have a great weekend, everyone.

Source: Early Investinghttps://earlyinvesting.com/bitcoin-passes-torch-to-altcoins/
FREE REPORT
9 Popular Stocks Insiders are Selling
Worried a stock you own might be sold off by insiders soon? Unlock the names of these vulnerable stocks NOW and subscribe to Market Mavens' top investment ideas.