basic truth in life is that, if it sounds too good to be true, it usually isn’t all it’s cracked up to be. The same applies to investing. You have probably heard how great the tax cut will be for companies across the board. Well, ‘warts’ are already appearing on the tax cut front.

In an earlier article I on taxes I wrote: “Will the airlines just use the [tax] windfall to launch into another round of airfare wars? (See article here.) The industry has squandered windfalls in the past, such as from plunging oil prices.” 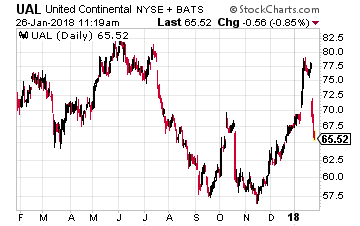 Based on the recent earnings call from United Continental Holdings (NYSE: UAL), it looks like another airfare price war is just around the corner.

UAL’s management said it plans to increase available seat miles over the next three years by 4% to 6% per year. That compares to a 3.5% rise in 2017 and only a 1.4% rise in 2016. That sounds a lot like previous mistakes of expanding too much too quickly and then being forced to slash ticket prices.

Other airlines, of course, would respond in kind and another price war would be underway. Adding to the concerns about the industry, UAL’s management also seemed to signal a willingness to take on low-cost carriers on a price basis.

So forget about anything you may have heard about the benefits of the tax cuts for the airline industry.

Yes, the benefits are real. But it looks like, once again, that the industry will squander the benefits as it did when oil prices fell steeply. Until it becomes clear whether the airline industry will go down the path of another price war, I would avoid them and in particular, United Continental.

This should just bring home the point to you that you have should never base an investment decision solely on tax or other government policies.

While the airlines seem to be fumbling an opportunity to prosper, what really caught my eye regarding the new tax law is the potential perverse effect it will have on the prospects for technology companies repatriating their overseas assets (some cash, but mainly bonds). 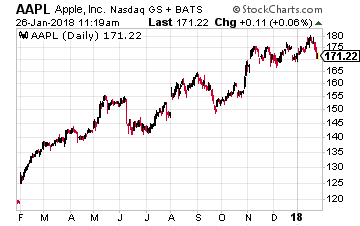 Apple (Nasdaq: AAPL) garnered a lot of headlines recently when it said it would make a one-off $38 billion tax payment on the repatriation of some of its overseas profits. That led to speculation by the Trump Administration and others about how other technology companies would follow Apple’s lead.

But some tax experts say it may not happen. They point to parts of the legislation that could end up having the direct opposite effect, leading firms to shift more of their assets (and jobs) offshore.

A law professor at the University of Southern California, Ed Kleibard, told the Financial Times “The bill is biased in favor of offshore real investment.” In other words, companies may perversely be encouraged to build plants overseas, creating jobs there. Let me explain…

There is a new tax on any overseas profits above a fixed, tax-free return that companies will be allowed to earn on their tangible assets, such as plant and equipment. This is known as the GILTI (global intangible low-tax income) tax and it is aimed at taxing excess profits from intangibles, such as a technology company’s or pharmaceutical company’s patents and intellectual properties. Thanks to technology, the share of many companies’ assets that are intangible has grown a lot in recent years.

However, the GILTI tax rate is only half the new U.S. corporate tax rate. And companies can take a credit for any foreign taxes paid on this tax. This may encourage firms to keep as much of their profits in tax havens as they can, lowering their overall foreign taxes to a level where they can fully offset the minimal GILTI tax.

And here’s where it touches on the earlier point I made about real overseas investments. A law professor at the University of Pennsylvania, Chris Sanchirico explained to the Financial Times that all sorts of multinationals will have an incentive to add to their offshore facilities like factories (and the linked jobs), since such action will boost their tangible assets outside the United States, therefore sheltering even more of their profits from tax.

The likely result of all these new tax ‘games’ that will be played by the big multinationals? Likely hundreds of billions of dollars will remain ‘trapped’ outside the U.S.

What It Means to You

As far as investment implications goes, I think it means you should stick to investing in the large U.S. multinational companies. These same companies are already enjoying the benefits of a much weaker U.S. dollar that the Trump Administration is encouraging. 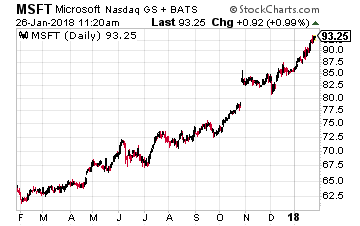 One prime example is Microsoft (Nasdaq: MSFT). In early December, its stock was down to $81 over worries about the tax bill. Now it is over $92 a share and still climbing. There are lots of reasons why, but I’m sure Wall Street has by now realized the new tax law won’t hurt Microsoft. Again, never make an investment decision solely on something like taxes. 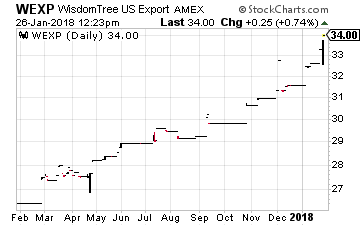 One other investment for you to consider is the WisdomTree U.S. Export and Multinational Fund (NYSE: WEXP). It is filled with blue-chip U.S. multinationals such as Microsoft, Boeing, Johnson & Johnson, Apple and Alphabet.

This ETF is up 21% over the past year and I would expect this type of performance to continue as long as the dollar tailwind and other macro factors (including taxes) continue to be favorable.