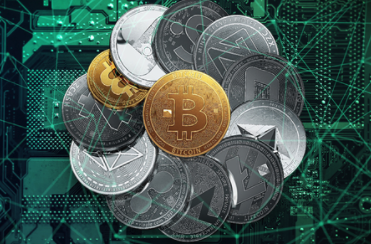 Sometimes it feels like we’re living in a sci-fi movie.

Venezuela has officially launched the presale of its “petro” cryptocurrency. According to the government, more than $735 million has been raised in the presale in just 20 hours. (I wonder how that compares with the country’s last bond sale…)

Venezuela plans to issue 100 million tokens in total, each backed by a barrel of oil. The starting price for each token is $60, and the presale ends March 19.

Apparently, the coins will be used to purchase deliverable oil from state-owned companies. The country also says that citizens who use the coin to pay taxes will get a 10% discount.

I’m very curious as to who’s buying these early tokens. Is it industrials that plan to actually use them for oil purchases? Venezuelan citizens who are sick of hyperinflation wiping away their savings? Neighboring countries that trade with Venezuela?

By the way, the U.S. Treasury has issued a statement saying that Americans should not participate, as it would probably violate sanctions against Venezuela.

Hinting at Crypto’s Potential
We don’t know if the Venezuela experiment will work. It certainly could because people who have suffered through horrific inflation tend to seek out alternatives: gold, silver, real estate… and now cryptocurrencies.

A government-backed digital currency could be attractive to both companies and people, especially when compared with the old, hyperinflated, nearly worthless currency, the bolivar. So even though the government has a bad financial record, local citizens, at least, may be willing to overlook it.

However, this is the first time a centralized power has released a cryptocurrency. It could go horribly wrong, in many ways.

We don’t know if they plan to “fix” the price of the petro to the price of oil, for example. That would take some serious engineering since there may be more demand than supply, or vice versa.

What if people start using the petro for everyday things? Do they plan to let the price rise far above the price of a barrel of oil, if demand is there? If each petro is worth $120, does it buy you two barrels?

We’ll know the answers to these questions soon enough. But the interesting thing about this story is how it demonstrates what crypto can do.

In the next few years, more countries, local governments and companies will begin issuing tokens or coins.

Let’s look at a hypothetical example. A city needs to finance a new toll bridge. They could use a platform like Ethereum to issue a token for that purpose.

There would be a “smart contract” that automatically shares a predetermined percentage of toll revenue with owners (once it’s operating). The tokens would trade freely on exchanges and find price equilibrium at a yield that investors are comfortable with.

Traditionally, the city would raise this money by issuing municipal bonds. Only institutional investors participate in these deals, so locals are left out in the cold.

But if they used a token or coin instead, they would get three major benefits:

Far more liquidity
Participation from small, non-institutional investors (aka 99% of all investors)
Efficient distribution of revenue with smart contracts on the blockchain.
It’s also a lot easier to store a token than it is a bond. Anyone can do it. And you don’t have to trust a bank or money manager to hold your money for you.

The toll bridge is just one example of how blockchains have the potential to transform the financial world.

There will also be equity tokens soon. They will be very similar to cryptocurrency but will represent shares in the company.

We’re already starting to see some amazing applications of blockchain technology. But if this were the internet, I’d say we’d be in about 1993. This is the very early adopter phase.

Over the coming years, we’re going to see some amazing technologies emerge.

The best part is almost anyone can participate in this blockchain revolution. 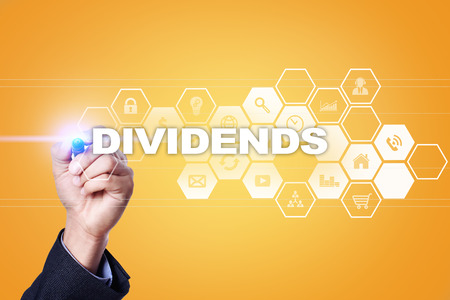 As a dividend focused stock analyst, I put less emphasis on short term share price fluctuations and more on dividend yields and dividend growth prospects. When the market turns volatile, such as what we have experienced in the last several weeks, it is good to go back to the basics of dividend investing, which for me is dividend growth. A growing payout should, over time result in a higher share price. One nice way to get a quick start to capital gains from dividend growth is to buy shares just before an announced dividend increase.

I maintain a database of about 130 REITs, which I use to track yields and dividend growth. The typical REIT increases its dividend rate once a year, at about the same time each year. Across the REIT universe, the dividend increase announcements come in almost every month of the year. Each month I like to cover the REITs on my list that have historically increased their payouts in the following month. You can use this information to establish longer term positions in stocks with growing dividends or try for the short-term capital gain that often occurs when a dividend increase is announced. Here are three potential REIT dividend increases for March. 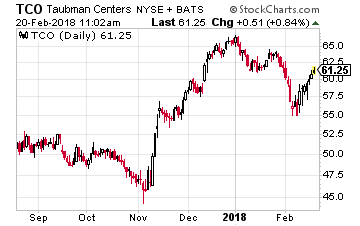 Taubman Centers, Inc. (NYSE: TCO) acquires, develops, owns and operates regional and super-regional shopping centers. The company has grown its dividend by a 6% annual compound growth rate for the last 10 years. The payout rate was boosted by 5.0% last year. Despite a challenging retail environment in 2017, the company was able to generate growth in all its key financial metrics.

The current dividend rate is 66% of 2018’s FFO/share cash flow guidance, so a moderate dividend increase is probable to keep the growth track record going.

I forecast a 4% to 5% increase in the quarterly payout. Taubman Centers should announce the new dividend rate in early March. TCO yields 4.1%. 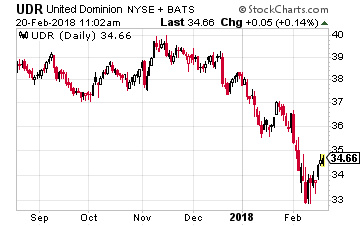 UDR, Inc. (NYSE: UDR) owns and operates multi-family apartment complexes. The company increased its dividend by 5.1% last year and has averaged annual dividend growth of 7.1% over the last five years. Adjusted FFO per share was up 5.5% for 2017.

Apartments have recently been viewed as a hot REIT sector that is slowing. Despite lower investor expectations, recent results from other apartment REIT have reported continued above average growth.

UDR should announce its new dividend rate in the second half of March. UDR yields 3.6%. 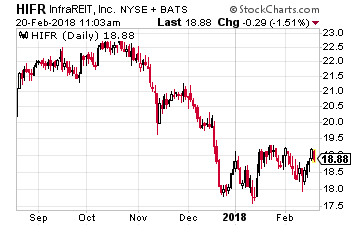 InfraREIT Inc. (NYSE: HIFR) is a REIT that owns electric power transmission and distribution assets in Texas. The company came to market with a January 2015 IPO. After its first year, the HIFR dividend was boosted by 11.1%. The dividend was not increased in 2017, even though revenues and cash flow were up in the high single digits.

During last year, the company ran into regulatory issues and was forced to exchange some assets. I expect the company will return to dividend growth in 2018 A high single digits dividend increase is very possible.

The next dividend announcement will be in early March, with an end of March record date and payment around April 20. HIFR currently yields 5.2%.