Even though the mania has cooled a bit, the technology behind Bitcoin – blockchain – is still a very hot sector on Wall Street.

And blockchain has come a long way from its very earliest days when it was a facilitator of drug deals using Bitcoin on the dark web. The market for blockchain-related products and services is forecast to reach $7.7 billion in 2022, according to the research firm Markets & Markets.

That forecast may turn out to be rather conservative. A survey conducted by Juniper Research of 400 executives from the world’s largest corporations found that 60% of them said they were considering using blockchain technology in their business.

Despite all the recent hype, you may be wondering ‘what the heck is blockchain (also known as distributed ledger technology)?’

Briefly, blockchain will enable companies doing business with each other to record transactions securely.Blockchain’s main strength lies in its trustworthiness. In other words, it’s tough to change what has already been recorded.

The main advantage of blockchain over existing processes is its ability to speed up and simplify complex transactions by making changes and updates immediately visible to all parties. A single blockchain-based system is also cheaper to maintain than the myriad of systems that, for example, banks use for transactions now.

The blockchain can also hold many more documents and data than traditional database storage, and it can hold embedded contracts, such as a car lease, whose virtual key could be transferred to a bank in the event of a default.

For a hint about what companies you should be looking at to invest into, a good place to start is to see which firms have either applied for, or have already received patents on blockchain technology. Not surprisingly (since blockchain can make transactions faster and more efficient), banks are among the leaders here.

Number one on the list – according to a study from EnvisionIP, a law firm specializing in analyses of intellectual property – is Bank of America (NYSE: BAC), which has applied for or received over 40 patents for blockchain.

Other American companies in the finance sector, such as Mastercard (NYSE: MA), are also leaders in blockchain patents. Yet, they seem to be slow on implementation.

The first financial companies to actually use blockchain technology in real activities come from across the pond in Europe. Let me fill you in…

In April, Spain’s BBVA (NYSE: BBVA) became the first global bank to issue a corporate loan using blockchain technology. The bank said it carried out the entire process for a €75 million corporate loan — from negotiating terms to signing the loan — on a mutually distributed ledger that kept both the bank and borrower up to date on the loan’s progress. And, the process cut the negotiation time down from “days to hours”.

For this pilot project, BBVA used a private blockchain for the negotiation and completion process, and then registered the completed contract on Ethereum’s public blockchain. BBVA’s partner is this test of blockchain technology was the Spanish telecoms company, Indra Sistemas. 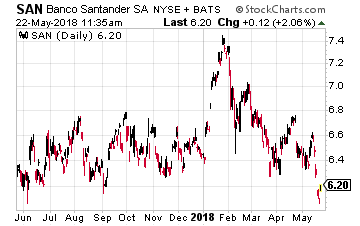 Not to be outdone is BBVA’s Spanish rival, Banco Santander (NYSE: SAN), which is Europe’s largest bank as measured by market capitalization. It became the first international bank to launch a cross-border payments system based on blockchain technology in April.

Its “One Pay FX” service is available for the bank’s customers in Spain, Brazil, Poland and the U.K. The four country launch covers around half of the annual foreign currency transfers made by individual Santander customers, and the bank said it plans to expand the services to more countries and types of customer such as small businesses in the coming months. Santander aims to eventually make it available as a standalone app that could be used by customers at other banks.

The One Pay system uses blockchain technology developed by California-based Ripple, which permits users to see the exact amount of money that will be arrive at the destination account before they make a transfer, and it shortens the length of time taken for such a transfer from several days to the same day or next day. 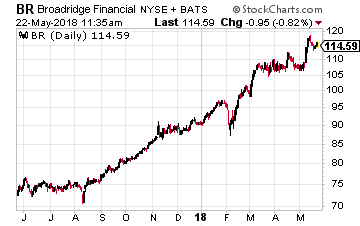 Santander also became the first company in the world to make it easier for investors to vote at an annual meeting. It and Broadridge Financial Solutions (NYSE: BR), a spinoff from ADP that services financial companies, ran a test at Santander’s annual meeting in March. Voting took place by the normal traditional methods, but they used blockchain to produce a shadow register.

This pioneering move could help revolutionize corporate democracy. Currently, investors often have to vote two weeks before a meeting to allow time for ballots to be counted. The process has been criticized, with claims that votes are frequently ‘lost’. It is also difficult at times for investors to vote outside their home market, which affects a company like Santander with shareholders all over the world. Hopefully, the use of blockchain will speed up the process at annual meetings and make it easier for more shareholder participation. 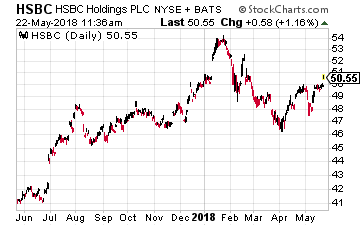 Finally, we have the global banking giant HSBC (NYSE: HSBC), which recently completed the world’s first commercially viable trade finance transaction in one day using blockchain. The blockchain trade was a processing of a letter of credit for the U.S. agricultural powerhouse Cargill for a shipment of soybeans from Argentina.

That seems insignificant, but could really be an industry-changing transaction. The centuries-old trade-finance industry, worth about $9 trillion today, would be enhanced by the reduction of the numerous documents and several days of processing needed for a single transaction to a paperless task that can be completed in hours. The soybean transaction would normally have taken five days to process.

Of course, before that can happen all the participants – banks, shipping companies, ports, and customs agencies – would have to agree to use the same blockchain technology. That is unlikely to happen in the near future. But with HSBC behind blockchain – it is a major player in the sector and took in $2.5 billion in trade-finance revenue last year – the technology may progress quicker than most expect. This could encourage global trade even more, thanks to lower transaction costs.

However, please note the technology HSBC used wasn’t strictly blockchain. The distributed ledger technology in question did use independent computers to record, share and synchronize transactions. But there were some important differences – it used less computer power and can be more easily scaled up than regular blockchain. And it is not truly open – users are required to authenticate themselves. But everyone with access to a ledger can see the same, up-to-date version. And it did take only one day versus the typical five days.

I suspect it is these types of variations of blockchain technology that will eventually adopted by businesses. But, we’ll have to wait and see. In the meantime, it will be interesting to see if U.S. financial firms finally get off their behinds and begin adopting blockchain as their European counterparts are.

From an investment viewpoint, I would only invest in the Spanish banks if you have a high risk tolerance. These banks still have a number of non-performing loans on their books, although they are making progress.

HSBC is a more solid bank and has a juicy 5%+ yield to go along with it and may be suited for conservative investors. For more possibilities of growth, there is Broadridge, whose stock has done extremely well – it is up 58% over the past year and 28% year-to-date. I would choose one of those two instead of a stock that has been hyped-up by Bitcoin mania like Square (NYSE: SQ).