These figures come from a new study by Crypto Fund Research. The growth of assets managed by crypto funds has also been impressive… 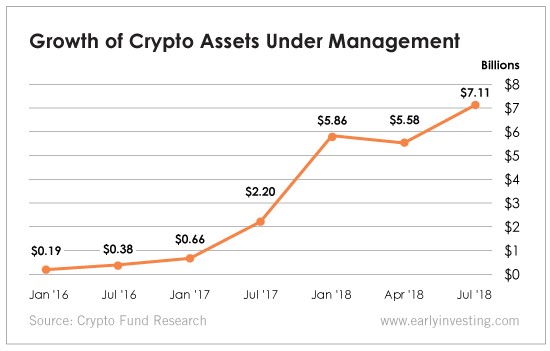 But let’s not get carried away. Compared with traditional hedge funds, this is peanuts.

The top 500 non-crypto hedge funds manage around $1 billion or more of assets…. each!

More than 700 hedge funds were launched in 2017, and there were 156 crypto fund launches in 2017, according to the Crypto Fund Research report.

It isn’t so much in its infancy as it is in its pre-infancy.

But there is something interesting – some would say even mysterious – going on here.

Logic would dictate a downturn in funds launched this year. Bitcoin prices have fallenafter peaking in January.

No eyebrows would have been raised.

After all, fund creation in 2017 was seen as the result of rapidly rising bitcoin prices. A slowdown this year would have been viewed as an understandable reaction to fallingprices.

Further, these are professional investors who nurture the savings of the wealthy. They pay attention to how prices are trending.

Yet, the opposite happened.

Crypto funds are on pace to beat last year’s total launches… despite sluggish prices and a continuing lack of regulatory clarity from the government.

2. The proving grounds. We’re about to find out how well these technologies work and if they can scale. Over the next two years, more than 75% of the active fintech blockchain projects will go from proof of concept to live production. In the meantime, the crypto and blockchain industries are attracting many of the world’s best developers, entrepreneurs… and investors. Marc Andreessen (Andreessen Horowitz)? Check. Fred Wilson (USV)? Check. Mike Novogratz? Check. Benchmark and Sequoia? Once again, check.

And now we see other VC money pouring in, catching up to hedge funds investing in crypto. Take a look at this chart… 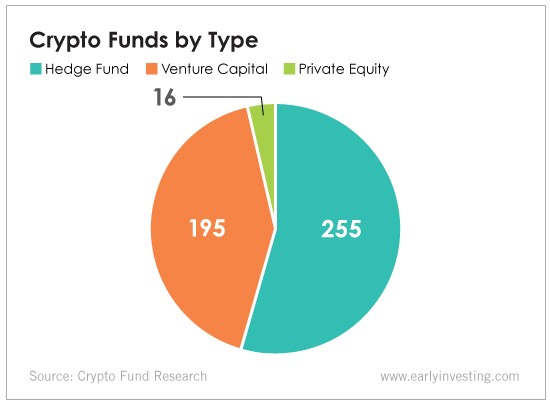 Existing tech/fintech VC firms are expanding their investments into blockchain startups and launching their own blockchain funds.

3. The beginning of the end of the final hurdle. Here’s why you need to pay attention to my Co-Founder, Adam. He’s seeing what professional investors are also noticing: the establishment of secure, regulated custody of crypto for institutional investors. The lack of a custody solution has kept institutional investors out of the crypto markets. But that barrier is about to go away. “It’s being built out right now,” Adam says. “The ‘institutional catalyst’ theory that I (and others) have proposed is on track. In fact, the case is stronger than ever.”

Bitcoin isn’t getting the most positive press these days. But serious and professional investors understand how little this matters.

They know bumps are part of the journey. They’ve avoided knee-jerk reactions to falling prices. Instead, they’re focused on the enormity and unusual upside of the investing opportunity.

We’ve asked ourselves, What will happen to the price of bitcoin if hedge fund investments in crypto go from 0.1% to, say, an easily attainable 10%?

The number we’ve come up with may be a little conservative, but we think it’s memorable nonetheless.

If you’re curious, I have great news for you.

My colleague Adam will be revealing it to everybody who tunes in to a special event he’s headlining a week from today.

This is one of the most important events we’ve ever hosted for our readers. If you want to know how you can reserve your limited-time spot for this special event – when Adam will specify how YOU can take advantage of the coming explosion in bitcoin and cryptocurrency prices – just click here.