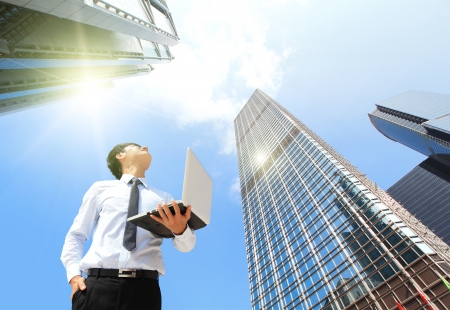 Cloud stocks are divided into three categories: the cloud owners, the cloud arms merchants, and the cloud users.

Clouds are built on open source software and commodity hardware. They’re meant to give their biggest benefits to users. Companies built using the cloud can become huge, like Netflix(NASDAQ:NFLX), Intuit (NASDAQ:INTU), Adobe (NASDAQ:ADBE) and Salesforce.com(NASDAQ:CRM).

Then there are the cloud arms merchants, companies whose main business is providing hardware and services to cloud owners. These include Nvidia (NASDAQ:NVDA), Intel(NASDAQ:INTC), Cisco Systems (NASDAQ:CSCO) and Dell Technologies (NASDAQ:DELL).

Elizabeth Warren says she wants to break up the Cloud Czars, saying that they’re too powerful.

All but one: Microsoft (NASDAQ:MSFT).

Why not break up Microsoft, especially since it’s now the most valuable company on the board, a market cap of over $900 billion, supporting 2018 revenues of $110 billion — nearly one-third of which it turned into operating income?

Maybe it’s because Microsoft pays its taxes, including almost $20 billion worth last year. But it’s also because Microsoft has already been visited by the antitrust police, 20 years ago. It paid dearly, losing its monopolies in PC operating systems and applications and then drifting for over a decade, held down by lawyers and fear.

Satya Nadella relaunched Microsoft as a cloud player in 2014, though Microsoft’s Azure cloud isn’t a monopoly. Nothing Microsoft does is a monopoly any more. Sony (NYSE:SNE) bests it in gaming  and its Edge browser and Bing search engine are considered also-rans.

But Microsoft is competitive in every cloud niche, it has a dividend yielding 1.6%, its trailing price-to-earnings ratio sits at under 30 and its public profile is low enough to stay well away from regulators. It is once-burned, twice-shy — a sadder but wiser cloud company.

International Business Machines (NYSE:IBM) has bet its future on buying Red Hat(NYSE:RHT) for $34 billion and making itself into a private cloud play.

Since the deal was announced in October, IBM shares are up 25%, well over the 16% gain of the Nasdaq. The shares are still cheap, sporting a P/E ratio of under 15 with a $1.57-per-share dividend paying a yield of 4.5%. Its market cap is just 1.5 times its sales, also cheap for a technology stock.

IBM was late to the cloud party because its older businesses did not need the cloud to operate. Mainframes were sort of clouds before clouds existed, and IBM has monopolized that business for decades. But clouds are slowly sinking that business, and IBM was run out of its old niches in PCs and minicomputers by Chinese competition, eventually selling most of its hardware units to Lenovo (OTCMKTS:LNVGY).

Instead, IBM sank its cash flow into the dividend. It bought a small cloud player called Softlayer, but wasn’t big enough to compete in public cloud. The idea behind the Red Hat deal, as the press release on it stated, was to transform IBM into a “hybrid cloud” provider.

The strategy is simple to describe. Red Hat software, including its Linux operating system and OpenShift (which lets companies put their own software into clouds as self-contained “containers”), will be offered by both Red Hat and IBM’s existing programmers. Enterprises can replace their aging data centers with small clouds, then quickly scale customer services compatible with those internal systems on public clouds.

If the strategy works, the value of IBM stock could easily double from here within a year, as it becomes a premier cloud merchant. But there is a lot of competition. It’s your cheapest speculation in the cloud.

Palo Alto Networks (NYSE:PANW) has gone from zero to $22.5 billion in market cap since 2005 on the back of cloud security.

Originally a “next-generation firewall” company, providing security products to keep bad guys out of data centers, Palo Alto has spent over $1 billion on acquisitions in the last two years. Most recently it bought Demisto, an Israeli security company, for $560 million. Demisto is in the business of “orchestrating” or automatically organizing a company’s security efforts using machine learning.

All this has given Palo Alto a cloud-like valuation. That $22.8 billion market cap supports just $2.2 billion in fiscal 2018 revenue. It should grow to $2.5 billion in fiscal 2019, which ends in July. Fast growth means all that money goes back into the business. There are no profits. But operating cash flow has grown consistently and will blow past $1 billion this year.

Palo Alto’s move to cloud is transforming the revenue mix into monthly subscriptions instead of one-time payments, making it a favorite among analysts.

The company is in a key niche, security, and leading with today’s key customers, those with clouds.

ServiceNow (NYSE:NOW) may be the biggest software company you’ve never heard of, thanks to the cloud.

ServiceNow is in the business of automating workflows. Its cloud-based platform organizes the movement of information among employees and customers. It started within computer departments in 2004, and has since expanded into serving entire enterprises, both internally and externally. The concept is that “work is the killer app,” and its latest update, dubbed Madrid, applies this to the mobile world as well as the desktop.

Shares rose 43% over the last year, despite the tech wreck. More important, they’re up almost 300% over the last five years. The $43.8 billion market cap is held up by $2.6 billion in 2018 revenue, up from $1.9 billion a year earlier. That’s growth people will pay for, even absent profits, and the company came close to break-even last year, losing just $26 million.

That computer workflow management piece of the company includes cloud management, making it a key competitor in the hybrid cloud world. It works with Microsoft but also Amazon’s AWS and VMware (NASDAQ:VMW).

ServiceNow has 37 analysts following it now, 28 of whom give it buy ratings . It’s expected to finally become profitable in 2019, to the tune of $3.10 per share.

In addition to commodity hardware, two key technologies were required to make the cloud work.

First comes virtualization, a virtual operating system that runs on top of applications and lets them all run regardless of the operating system they’re written for. Then comes distributed computing, in which jobs can run on part of one computer, on several, or on thousands at once.

So before there could be clouds, there was VMware, serving up virtualization. In the last decade it was the more-profitable spin-off of EMC, and 80%-owned by that company, which makes large data storage systems. Today EMC and VMWare are part of Dell Technologies but its tracking stock still trades, and since its new parent went public at the end of 2018 it’s up 33%.

VMWare is a prize for analysts, investors and Michael Dell, who paid $67 billion for EMC (and its 80% stake in VMware) in 2015,  because it is a lean, mean profit machine. Revenues have gone from $6 billion in fiscal 2017 to $8 billion in 2018 and to $9 billion for the 2019 fiscal year, ending Feb. 1, with net income rising to $2.4 billion last year. That means VMWare trading at “just” 8.5 times sales, which is considered affordable for the growth.

For the world of hybrid cloud, VMWare now offers its own operating system, Cloud Foundation,which runs on EMC hardware . This lets companies easily connect their existing VMWare data centers to public clouds like Amazon’s. It has also signed a partnership with Microsoft to converge their previously competitive hypervisors , the software that makes virtualization possible, bringing some of its customers to the Microsoft cloud.

VMWare already is where IBM wants to be.

Dana Blankenhorn is a financial and technology journalist. He is the author of a new mystery thriller, The Reluctant Detective Finds Her Family, available now at the Amazon Kindle store. Write him at danablankenhorn@gmail.comor follow him on Twitter at @danablankenhorn. As of this writing he owned shares in MSFT, AAPL and AMZN.