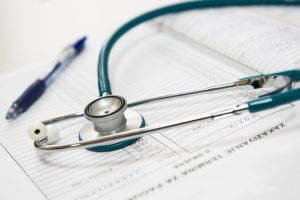 ne of the more interesting figures of the American Revolution is Thaddeus Kosciuszko, a Polish army officer who was so moved by the patriot’s cause that he came to the colonies specifically to join the fight. Kosciuszko was named head engineer of the Continental Army, and his help was critical at the Battles of Ticonderoga and Saratoga.

The good citizens of Indiana and Mississippi both named counties in his honor. The Hoosiers went one better and named the county seat Warsaw as a salute to Kosciuszko’s heritage.

It might seem strange that a city in the heartland has the same name as the capital of Poland. But Warsaw, Indiana isn’t like most towns. In 1895, the city was altered forever when a salesman named Revra DePuy decided that he no longer wanted to work for other people. So he did what any American would do: He became an entrepreneur.

At the time, bone fractures were set with wooden splints. DePuy, a splint salesman, had a revolutionary idea: he started using metal—which could be bent to fit any person—instead of wood. That’s how, in a garage in Warsaw, Indiana, Revra DePuy launched the town’s orthopedics industry.

Retire Off of Just One 5G Stock?[ad]

DePuy’s business did very well, and within a few years he hired Justin Zimmer to be his first sales manager. After DePuy died, Zimmer wanted to buy the company but wasn’t able to. So, like DePuy before him, he also started his own orthopedic business right in Warsaw. The orthopedics industry grew and grew and grew. Soon, the advent of plastics launched the industry into a new age of design and innovation.

In 1977, entrepreneurs Dane Miller, Niles Noblitt, Jerry Ferguson and Ray Harroff—two of whom had worked for Zimmer—branched out on their own. They formed another orthopedic company, which they called Bioemt, right in Warsaw.  In their first year, the company recorded sales of $17,000 and a loss of $63,000. Despite this modest start, Biomet soon delivered several years of record sales.

If any business could be described as the perfect business, it might be medical devices. The business has demographics on its side, and the industry is constantly driven by technology and prices increases. The stocks tend to be very stable, and highly profitable.

Several medical device stocks like Medtronic (MDT), Abbott Labs (ABT), Stryker (SYK) and Boston Scientific (BSC) have been market-beaters for years. According to data available at Professor Kenneth French’s Web site, medical device stocks have increased by more than 4,200,000% over the last 80 years. That’s far better than the overall market.

Here’s a look at the Dow Jones Medical Equipment Index since 2000:

Today Warsaw is the backbone (sorry) of the global market for replacement joints. Today, knee and hip replacements are quite common, and about 40% of the worldwide orthopedics business still flows in and out of Warsaw, where DePuy Inc. is still based. A few years ago, it was bought out by Johnson & Johnson (JNJ).

Both Zimmer and Biomet also remained in Warsaw. Then in 2014, the two companies merged creating, what else, Zimmer Biomet (ZBH).

Despite its past success, the stock hasn’t done much recently. That’s why I wanted to highlight the stock this week. Of course, the nasty bear market didn’t help the shares. Zimmer Biomet fell from a high of $161 in February to a low of $74 in March. Even going back four years, Zimmer Biomet has underperformed the broader market.

There have been concerns that the industry is under pricing pressure. I understand the worry. Price increases are the heart and soul of orthopedics, and Zimmer Biomet is no exception. The company enjoys gross margins of 70% and net margins of 20%.

The company’s last earnings report, for the quarter ending on March 31, was quite good. Zimmer Biomet earned $1.70 per share, which beat estimates by 32 cents per share. The current quarter, however, will be worse. More than 80% of the company’s business comes from elective procedures. Before the coronavirus hit, Wall Street had been expecting Q2 earnings of $2.01 per share. That estimate is now down to a loss of 77 cents per share.

Like many other companies, Zimmer Biomet has withdrawn its financial guidance. The earnings for 2020 won’t be much, but I think it’s very reasonable to expect that theirs will bounce back next year and in 2022.

This is a good time to take advantage of the lower price. As the economy gets back on its feet, Zimmer Biomet will be a big winner.