In today’s world, there is one certainty when it comes to investing that you need to be aware of… new technologies will disrupt nearly every industry.

Take the stodgy airline industry. The Internet of Things (IoT) is about to make airlines more profitable than they’ve ever been in the past. I’m sure you’re wondering how this will be accomplished. Simple – instead of treating their passengers as mere travelers, airlines are beginning to look at them as online consumers that just happen to be on their plane.

Before I delve into more details, let me fill you in on more background on the industry.

In this age of low-cost airlines, the days of when airlines made the majority of their money from airfares are largely gone. Thanks to low-cost airlines, so-called ancillary services have become a mainstay and an important source of revenues for all of them.

A report last month from the research firm IdeaWorksCompany in conjunction with the online car rental company CarTrawler gave insight into the growth of ancillary fees. The report projected that for 2017 airlines will have received a total of $82.2 billion in ancillary revenues. That is about 10.6% of their projected total revenues for 2017.

That $82.2 billion number is also a 22% increase from 2016, with most of the ancillary revenues being garnered by the traditional airlines. Quite a contrast from just 10 years ago when the top 10 airlines (ranked by add-on services) earned only $2.1 billion from ancillary services.

One main reason is the fact that, within the domestic U.S. market and the short-haul operations of airlines outside the U.S., the prevalence of a ‘Basic Economy’ product has driven ancillary sales. The aforementioned report cites airline estimates that over 50% of passengers who purchase this product opt for higher priced bundling options.

Since IdeaWorksCompany released its first report in 2010, the growth of ancillary revenue for airlines has been significant. At that time, the total figure was $22.6 billion with an average spend per passenger of $8.42. Utilizing worldwide passenger numbers provided by IATA (International Air Transport Association), the latest report showed an average spend per passenger of $20.13, with $13.96 being accounted for by to a la carte services, up from just $4.54 in 2010.

However, the lure of buying duty-free goods on airlines is becoming stale for passengers. A 2016 report from m1nd-set Generation forecast such sales would experience an annual growth rate of minus 1.5% for airlines through 2025.

Another revenue source has to be found and quickly. And it’s there… awaiting the airlines that adopt in-flight broadband and Wi-Fi – the Internet of Things in the air.

Passengers Want to Be Connected

Passengers’ expectations of the in-flight experience is changing rapidly. They now expect the same level of connectivity at an altitude of 30,000 feet as they do on the ground.

That much was pretty clear in a study conducted by the market research firm GfK and Inmarsat PLC (OTC: IMASY), the world’s leading provider of global mobile satellite communications. Here are the quite interesting results:

Connectivity now ranks behind only ticket prices and flight slots as a priority for passengers. That could be seen when that same survey revealed 44% of passengers would switch airlines within a year if what they considered to be a minimal level of connectivity was not available. This is especially true of business travelers, as 56% said they want the ability to work while in flight.

Yet, most airlines still lag in offering connectivity to their passengers. The aforementioned report from IdeaWorks found that a mere 53 of the world’s estimated 5,000 airlines offer “in-flight broadband connectivity.”

Many seem unaware that they now have access to a global, reliable broadband network in-flight. As David Coiley of Inmarsat Aviation told the Financial Times, “Airlines have to adapt to this new opportunity.”

And it is an opportunity. Consider shopping an online store at 30,000 feet filled with everything from ground transport options to tours to other destination-related activities. Or returning passengers could do their grocery shopping while in-flight to have the groceries delivered when they arrive home. The possibilities are almost endless.

A study conducted by the London School of Economics and Inmarsat said that in-flight broadband – offering streaming and online shopping to passengers could create a $130 billion global market within the next 20 years. The study estimated that the airlines’ share of that total could amount to $30 billion in 2035. That’s quite a jump from the forecast $900 million in 2018.

With this possibility of e-commerce revenue streams in the not too distant future, it may be time to look at the airlines. Even long-time skeptic Warren Buffett now owns airline stocks including Southwest Airlines, AmericanAirlines, Delta Air Lines (NYSE: DAL) and United Continental Holdings (NYSE: UAL).

If you are thinking of going the same route as Warren Buffett, I would stick with the airlines that have the best Wi-Fi connectivity. Conde Nast Traveler magazine reports that a survey from Routehappy found that U.S. airlines are leading the way, with at least a chance of Wi-Fi on 83% of the total seating capacity.

Two of the top three airlines globally with the highest percentage of seats with Wi-Fi connectivity, according to the survey, are Delta Air Lines and United. Other smaller airlines with good connectivity are JetBlue and Virgin America, which was sold to Alaska Air Group (NYSE: ALK). I would focus on Delta, United, and Alaska Air. 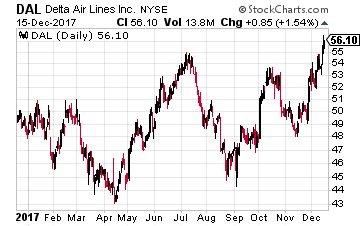 Delta operates a fleet of over 700 aircraft and serves more than 170 million customers annually.

Despite two major U.S. hurricanes, passenger revenue per available seat mile rose 1.9% year-over-year in the third quarter. The company forecast that in the fourth quarter this metric would climb somewhere between 2% and 4%, which is encouraging.

The company’s stock is up nearly 10% year-to-date. Nevertheless, it is trying to enhance its shareholders’ wealth through dividends and share buybacks. In May 2017, Delta announced that its board of directors approved a new share repurchase program worth $5 billion and raised its quarterly dividend by more than 50%. In the third quarter, Delta returned $769 million to its shareholders through dividends ($219 million) and buybacks ($769 million).

Another plus is the company’s discipline, which is sometimes a rarity in the airline industry. In the third quarter, Delta expanded capacity less than traffic growth and thus improved load factor by 150 basis points to 86.9%. 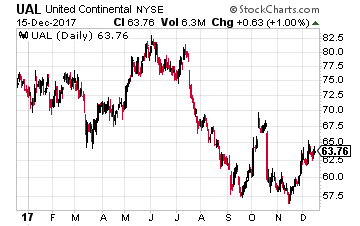 United is the world’s largest airline, operating about 5,000 flights a day. Unlike Delta, it is not showing growth in its passenger revenue per available seat mile. But it is showing improvement – the company’s latest estimate is for it to be flat to down 2% year-over-year. That compares to the previous estimate of down 1% to 3%.

Its return on equity (ROE) is 25.3% should support its robust expansion plans. Its ROE is impressive too when compared to that of the S&P 500, which comes in at only 16.1%.  And it is cheap. Its trailing 12-month enterprise value to earnings before interest, tax, depreciation and amortization ratio is only 4.6. That compares to the value for the S&P 500 of 11.7.

The company’s stock has had a tough year and is down 13.25% year-to-date. Maybe that’s why it has stepped up its efforts to reward its shareholders. It has bought back $1.3 billion of stock in the first nine months of 2017. And in December, its board of directors gave the go-ahead for an additional share repurchase program worth $3 billion. 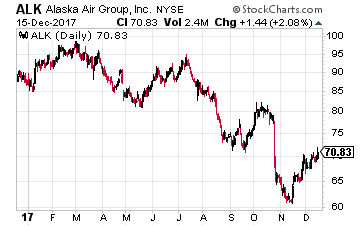 Alaska Air operations cover the western U.S., Canada and Mexico as well as, of course, Alaska. I like its purchase of Virgin America this year, despite the rise in the amount of debt it now has. The company also owns Horizon Air.

No denying that 2017 has not been a good year for its shareholders, with the stock down 21.5%. And like its airline peers, Alaska Air management is attempting to reward its patient shareholders through share buybacks and dividends. The company has increased its dividend every year since inception and will spend about $145 million on dividends in 2017.

Its after-tax return on invested capital (ROIC) is a very respectable 21.3% and its estimated 2017 pre-tax margin of 25% should lead the industry. In the first nine months of 2017, Alaska Air generated revenues passenger mile of just over 39 billion (up 6.6% year over year). Its load factor stood at 84.6%, compared with 84.2% in the first nine months last year.

The bottom line is that it has been a turbulent year for airline stocks as the combination of natural disasters and terrorist attacks have taken their toll. Not to mention industry overcapacity, high labor costs, and now rising fuel costs.

But now may be the time for contrarian investors to look past the short-term turbulence and take a small position in the airlines that are forward-looking. I fully expect we won’t recognize the industry in a decade as technology disrupts it.