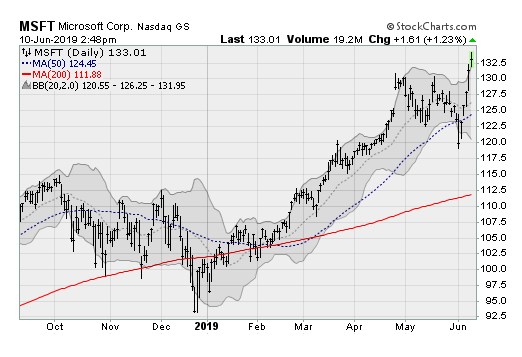 Remember last week, when the technology sector was slammed lower on worries over higher regulatory scrutiny? Wall Street apparently doesn’t, as stocks in the sector are zooming higher after the Nasdaq Composite dramatically tested below its 200-day moving average.

All it took was some dovish chatter from the Federal Reserve to turn sentiment around in a big way. Also helping was over-the-weekend news that President Donald Trump’s Administration had reached an agreement with Mexico, relieving the risk of fresh import tariffs.

Some impressive rallies are under way, particularly in stocks poised to benefit from the coming launch of new video game hardware in 2020. Here are four stocks worth a look:

Shares of GPU/CPU maker Advanced Micro Devices (NASDAQ:AMD) are zooming higher, pushing up and over the prior highs set last September to return to levels last seen in 2006. This comes as hype builds for the new Xbox and PlayStation game consoles from Microsoft (NASDAQ:MSFT) and Sony (NYSE:SNE) next year. Both are using AMD’s hardware to power their devices.

Microsoft stock is breaking up and out of a three-month consolidation range to hit new highs as hype builds for “Project Scarlett” — the company’s new Xbox console. At the 2019 E3 show, executives showcases 60 new games for both its console and the PC including Halo Infinite. The new Xbox, capable of 8K resolution, is poised to debut in late 2020.

The company will next report results on July 18 after the close. Analysts are looking for earnings of $1.21 per share on revenues of $32.8 billion. When the company last reported on April 24, earnings of $1.14 beat estimates by 14 cents on a 14% rise in revenues.

Shares of Marvell Technology Group (NASDAQ:MRVL), maker of digital and analog components for everything from hard drives to Wi-Fi cards, are rebounding to challenge the highs set in late April. This marks nearly a double off of the lows seen in late December. This also represents another challenge of the highs seen in late 2017 and early 2018.

The company will next report results on Sept. 5 after the close. Analysts are looking for earnings of 15 cents per share on revenues of $654 million. When the company last reported on May 30, earnings of 16 cents beat estimates by two cents on a 9.5% rise in revenues.

eBay (NASDAQ:EBAY) shares are pushing up and out of a five-month consolidation range, pushing to highs not seen since early 2018 and capping a rise of nearly 50% off of its December lows. Rumors have been circulating in recent weeks that the company could soon start accepting cryptocurrencies. Investors have been focusing on improved margin profile, which drove recent earnings upside surprise.

As of this writing, William Roth did not hold a position in any of the aforementioned securities.