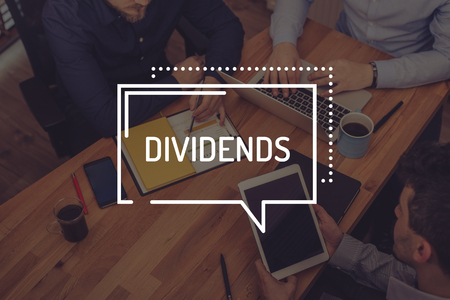 Sometimes what looks like a great investment deal is just the opposite. I see many investors and financial writers who view stocks trading at a discount to book value as “good deals”. The reality is that these “good deals” are often a danger to your portfolio value. This especially applies to the business development company (BDC) sector.

The book or net asset value of a company is the assets owned minus debt divided by the number of shares outstanding. You can view it as the amount an investor would receive for each share if the company were to be liquidated. It is an understandable assumption that if a stock is trading at a discount to the net asset value, an investor picks up some “free” value by purchasing shares at less than the liquidation value. If you add in a high dividend yield, this type of stock looks like a winner. Yet several features of pass-through and the BDC business structures make this analysis a path to losing money on this type of stock.

Companies that use a pass-through business structure do not pay corporate income taxes in exchange for paying out the majority –usually 90%– of net income as dividends to investors. Since these companies have little or no retained income to fund growth, the usual practice is to pay for growth projects or acquisitions with a combination of issuing new equity and debt capital. A company with stock trading at a premium has a significant advantage when raising capital through additional stock issuance. For example, a company price at 1.2 times book value can buy $120 worth of assets for every $100 of new stock issue. For a company with stock trading at a discount, issuing new shares means the company will overpay for assets to grow the business. If the stock is at a 20% discount to NAV, using stock to raise capital means the company will pay $125 for $100 of asset growth.

BDCs face another challenge. A BDC must pay out at least 90% of the net interest income it earns as dividends and the BDC rules do not allow these companies to set up loan loss reserves. By law, BDCs make business loans to high-risk, non-public mid-sized corporations. Because of the types of lending clients it serves, a BDC cannot avoid loan losses. If the company does not have a growth plan, the asset base will steadily bleed off. Another rule limits debt to 50% of assets, so a BDC must issue stock, just to stay even. 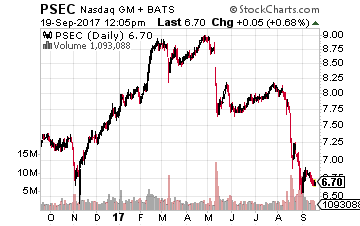 For a BDC, having a stock that trades at a deep discount to NAV inevitably leads to a death spiral of declining interest income earnings and dividend reductions. It is very, very difficult for a BDC management team to stop the decline, as the dividend cuts lead to share price declines, which leads to a deeper discount to NAV. No matter what you may read, avoid any BDC trading at a significant discount to NAV or book value. Here are three you’ll want to avoid:

Prospect Capital Corporation (NASDAQ: PSEC) is one of the larger BDC’s with a $2.4 billion market cap. In August PSEC slashed its dividend by 28%. This was the second dividend reduction in the last two-and-a-half years. The stock trades at a 28% discount to NAV, so is well into the death spiral. Do not be tempted by the 10.8% yield. 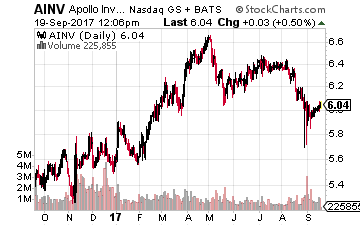 Apollo Investment Corp. (NASDAQ: AINV) is a $1.4 billion market cap BDC. The company reduced its dividend by 25% in 2016. AINV trades at a 10% discount to NAV. The current yield is 10.0% and the company’s net investment income just covered the dividend for the 2017 second quarter.

Small cap BDC Medley Capital Corp (NYSE: MCC) may look attractive with its 11% yield. However, the stock is now trading at a 31% discount to book value. Earlier in 2017 Medley Capital was forced to cut its dividend by 27%. Shares fell 16% in on day and despite small bump in July they’ve continued to slide. 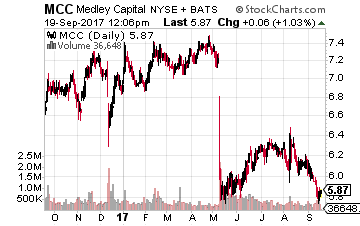 High-yields can look attractive in a low yield environment where none of the traditional safer investments like bonds and CDs pay anything near what we expect or need… especially if you’re looking to live off it for retirement money. That’s why it pays to look at closely at numbers like NAV and cash flow.

And I steer my readers clear of these stocks with our Monthly Dividend Paycheck Calendar system… a system that can help you catch up quickly if you think you’ve not saved enough for retirement and avoid the yield traps of the likes of the stocks above. The calendar shows you which stocks to pick, when to buy them, when you get paid your dividends and how much. All you have to do is buy the stocks you like and tell them where to send your dividend payments. 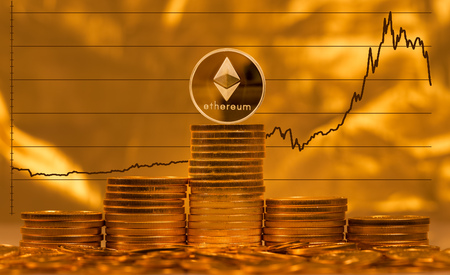 The U.S. government will pay $474 billion in interest on its debt this year. And that’s with rates around 1%. 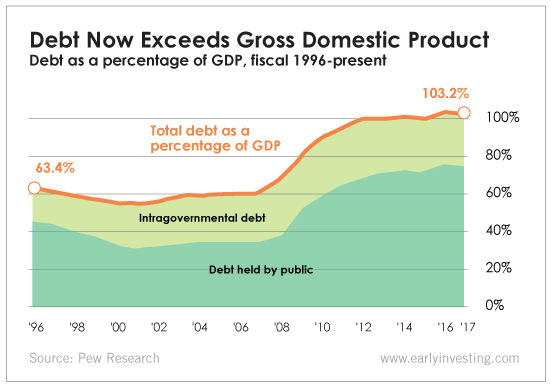 I believe that eventually we’re headed for a financial reset. I don’t know exactly when or how. That will depend on the whims of bankers and politicians.

But I can’t picture any long-term (20-year) scenario where the dollar does well. There appears to be zero chance of cutting federal spending anytime soon. It should have happened long ago, yet the spending seems destined to keep rising until the whole thing implodes.

Eventually the interest on the debt will become unsustainable, and we’ll have to start monetizing our debt on a massive scale. I’m not saying we’ll default on our bonds. I’m simply questioning whether the dollars they’re paid back with will have much value.

When this happens, we’ll have an opportunity to choose a new system. I would vote for a cattle-based monetary system over the current one, personally.

But luckily we have bitcoin. The rise of cryptocurrencies like bitcoin may prove to be a catalyst that speeds the transition.

Cryptocurrencies offer a path forward to a new and better monetary system.

A system where the money supply can be hard-coded. One that doesn’t require middlemen… and that vastly increases efficiency.

It’s no coincidence that bitcoin is rising now.

Bitcoin was launched amid bank bailouts in 2009 by a guy who thought the financial system was broken. Fortunately, Satoshi Nakamoto was a genius, and he created a brilliant piece of software.

It’s growing exponentially now because people are looking at the current system, shaking their heads and then looking for something else.

And bitcoin is transforming the financial world with blockchain because the technology is superior.

People want this. They want a way to store value and trusted transactions that doesn’t suck.

If this crazy monetary revolution does happen, don’t you want to own at least a piece of it?

Cryptocurrency ownership rates are still well under 1%. If you do buy, you’ll still be doing so extremely early.

It’s not silver or platinum. It’s not aluminum, nickel or lithium, either. But this “magic” metal is found in everything from cars to airplanes, smartphones and computers, even batteries and cosmetics. It even has the power to fight diabetes, depression, weight loss and cancer. It’s worth billions, even trillions. But here’s the problem—this metal is disappearing. The world’s reserves are quickly being sucked dry. But a group of geologists have just struck the motherlode, and the one company behind it could earn investors an absolute fortune as they solve the greatest commodity crisis in human history.  Click here for more information.