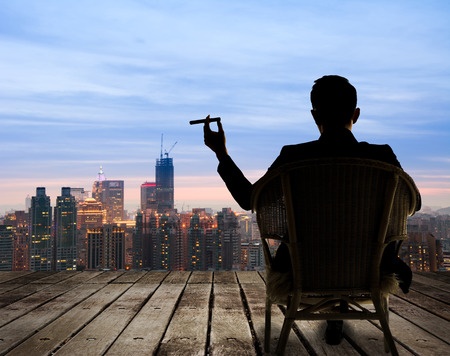 Watching stock market volatility has become quite interesting the last few weeks. I’m not talking about watching the actual day-to-day VIX moves, they’ve mostly been boring. Instead, I’m referring to how the VIX has been moving in relation to what’s going on in the world.

In other words, I find investors’ reaction to major world news items to be… quizzical. There simply doesn’t seem to be a lot going on, well, anywhere, which is cause for concern among stock investors.

At first, it seemed like the nuclear threat from North Korea was going to be a source of higher VIX levels for the foreseeable future. However, traders soon brushed off the harsh rhetoric between the US and North Korea. And, even threat of nuclear war is barely moving the needle in the VIX.

Granted, it could just be that most experts believe the only solution to dealing with North Korea is a diplomatic one. Still, you’d think even the tiniest threat of nuclear annihilation would strike a chord with investors. But fear, it seems, is at a minimum these days.

At least part of the reason volatility remains lower than expected is due to the rampant amount of volatility selling taking place. I’ve mentioned this before, but selling volatility is typically a highly successful strategy. And, it’s become a major source of yield for many traders. 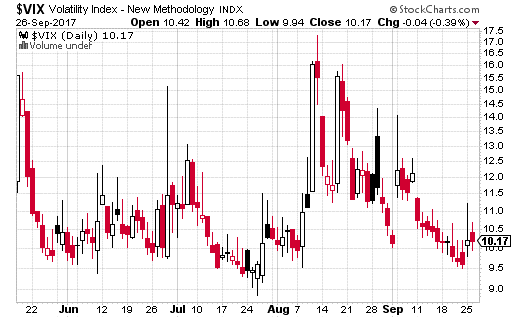 Shorting the VIX is just part of it though. Actual, realized volatility has also been at its lowest levels in recent history. It’s not just the options traders who aren’t concerned – stock buyers (and sellers) are simply not moving the market very much either. It’s been the case for much of 2017.

Still, volatility can become a factor in a hurry. We know from the Financial Crisis of 2008-2009 just how high and fast the VIX can move. It’s never a good idea to totally ignore volatility.  There’s nothing wrong with selling it to make money, but be darn sure you’re ready to buy it if things get dicey.

One massive trader is not convinced volatility will remain low the rest of the year. This trader made a massive bet on higher VIX levels back in the summer – and just recently rolled the enormous trade (originally set to expire in October) to December.

The trade itself is a call ratio spread financed with short puts. More specifically, the trader bought the VIX December 15 call versus two of the December 25 calls, while also selling the December 12 put. The trade was executed for a $0.20 debit, but the trader received a $0.20 credit when setting up the original October trade. In other words, this entire spread was basically done for even.

The really interesting part of this trade is just how huge it was in terms of number of contracts. The call spread was 260,000 by 520,000 contracts, with the puts also selling 260,000 times. That’s a crazy amount of options. If you include the closing/rolling of the October spread, there were 2.1 million options traded in this one gigantic trade – the highest in recorded history.

So what’s the trade mean?

Well, the strategy breaks even with the VIX between 12 and 15 on December expiration. It’s a winner from 15 up 35, with peak gains at 25. Finally, it’s a loser under 12 or above 35. Essentially, it’s a huge bet on higher volatility, or a relatively cheap way to hedge a massive stock portfolio. (By the way, peak gains would be about $250 million.)

As always, if you’re interested in betting on higher volatility or hedging your own portfolios with VIX, there are simpler ways to do so. One example is the December VIX 15-20 call spread, which can be bought for $0.75. Breakeven is at $15.75 and you can earn $4.25 max gain if the VIX spikes to 20 or above at December expiration. That’s over a 5 to 1 payout to risk ratio, which makes it a very cheap way to get long volatility if it spikes higher by the end of the year.