Here is one item that surprised me a bit in the course of research project called the Singularity… After years of a lot of hype and false starts, the shift to renewable energy has finally begun to move ahead at a pace that has taken many by surprise.

The IEA added that solar power was the fastest growing subsector, with generating capacity soaring by 50% in 2016 to over 74 GW. China accounted for almost half of the gain. The forecast from the IEA calls for another 660 gigawatts of solar power capacity to be added by 2022.

Even the biggest oil company in the world – Saudi Aramco – has taken notice. It called this disruptive macro trend a “global transformation” that is “unstoppable”.

These unstoppable macro trends are just the type of situations that spell profit opportunities for you. But before I get into some specific places for you to invest, let me fill you in more on what is driving the accelerated move into renewable energy.

One reason for the recent growth in renewable energy power generation is that major global multinationals are demanding it.

Just two weeks ago, Microsoft (Nasdaq: MSFT) agreed to buy all the electricity produced from a new wind farm in Ireland for the next 15 years. The wind farm is being built by General Electric (NYSE: GE) and will power Microsoft’s cloud computing services in the region.

This move will take Microsoft’s direct global procurement of renewable energy worldwide to nearly 600 megawatts. But it is hardly the only company taking such measures. Three weeks ago, Facebook (Nasdaq: FB)announced its plans for a new data center in Virginia would include power supplied by solar power facilities built by Dominion Energy (NYSE: D).

So far in 2017, U.S. companies have announced purchase agreements for two gigawatts of power. This number is sure to rise as over 100 (40+ in the U.S.) multinational companies have committed to make their electricity supplies 100% renewable.

However, the real driver behind the rapid acceleration in renewable energy power generation comes from the emerging economies, led by China. As with telecommunications and financial services, the emerging world is bypassing the old technologies and moving straight into new technologies.

In many cases, renewable energy is now the cheapest form of new power generation for these countries. A study from Morgan Stanley pointed to the fact that the cost of solar power panels has fallen by more than 50% in less than two years, thanks largely to China. It added that in countries with favorable wind conditions, costs for wind power can be as low as one-half to one-third of natural gas or coal-fired power plants.

The leading alternative source of energy in the developing economies is solar power. Moody’s estimates that, by the end of the decade, emerging markets will be home to 353 gigawatts of solar power capacity – an increase of 2.6 times the 2015 levels.

While China will account for the majority of this increase, other developing regions of the globe are also participating. Moody’s says that, by the end of 2018, Latin America is scheduled to have installed 14 gigawatts of capacity (nearly five times more than 2015), the Middle East and Africa will also have installed 14 gigawatts (a seven-fold increase from 2015) and India will have added 28 gigawatts of solar power capacity (a jump of nearly six times).

The bottom line, according to the IEA, is that in 2022 renewables will have 30% of the global power market with a total growth in capacity of 920 gigawatts, again led by China, which has already accounted for 40% of the overall growth in renewable energy.

3 Ways to Invest in Renewable Energy

Unfortunately, some of the very best companies that are at the center of the renewable energy industry do not trade in the U.S. For example, the Danish firm Dong Energy (soon to be named Ørsted) is the world’s largest builder of offshore wind farms. 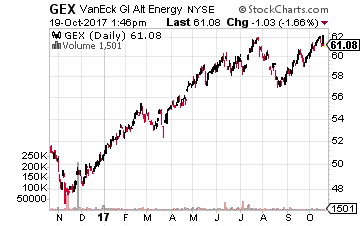 But that doesn’t mean you can’t make money with some U.S.-listed investments. For very broad exposure to the sector, there is the VanEck Vectors Global Alternative Energy ETF (NYSE: GEX). It is up a very nice 21% year-to-date and over 17% the past year.

The fund holds 31 securities across a broad spectrum of industries related to renewable energy. The companies in the fund must obtain at least half their revenues from the renewable energy industry. So, for example, Tesla (Nasdaq: TSLA) is in the fund. GEX does have a global flavor with about 57% invested in the U.S. and the rest globally. 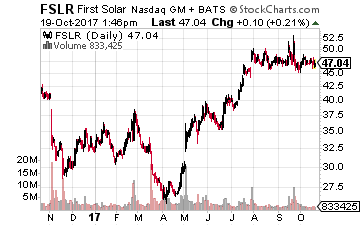 For single stock exposure to solar power, a good choice is First Solar (Nasdaq: FSLR), which is also in GEX’s portfolio. The stock has gained nearly 48% year-to-date. The company is the leading global provider of solar energy solutions with more than 10 gigawatts of installed capacity.

The company’s revenues are split almost 50-50 between sales of solar modules (using its proprietary thin-film semiconductor technology) and services that provide complete solar power systems solutions including project development, construction, along with operation and maintenance. The latter is a source of recurring revenues.

While the U.S. market accounted for 83% of its revenues in 2016, First Solar is moving toward where the growth is. Almost 90% of its project pipeline in the latest quarter – 3 GW of mid-to-late-stage opportunities – comes from overseas. The geographic diversification is wide with orders from India as well as Latin America, Africa, Europe and the Asia-Pacific region. 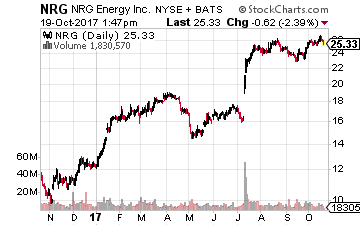 Another possible way to play the rush to renewable energy is through a utility that is involved in the sector. One such example is NRG Energy (NYSE: NRG), which is the second-largest U.S. power producer and is expanding its renewable energy operations. Its stock has soared 113% year-to-date and is up 123% over the past 12 months. So even more than the double digits promised in the headline.

I like the fact that its CEO, Mauricio Gutierrez, gets it. He said in February that utility companies failing to change their business model would become “obsolete” thanks to the “unprecedented disruption” in the industry.

In the second quarter of 2017, NRG revenues from renewables came in at $126 million. That sounds small but the growth rate was impressive – up 22.3% year-over-year. In the third quarter, NRG signed a contract to sell power for 22 years from three solar projects to Hawaiian Electric.

The company is also involved, together with Japan’s JX Nippon Oil & Gas, in Petra Nova. This is the world’s largest post-combustion carbon-capture system. The unit is capable of capturing more than 5,000 tons of carbon dioxide daily. That is the equivalent of removing over 350,000 cars from the road.

Renewable energy is definitely a sector you want to invest in as it has finally moved past the hype stage and on to becoming a growing source of power in the real world. It’s just one part of a transformation in technology, society, lifestyle, and even life itself that’s happening all around us. I call this the Singularity.

The Singularity presents investors with the opportunity for a piece of the over $100 trillion growth over the next seven years from all of these changes. Growth for companies like First Solar and NRG mentioned above as well as many others you’ve probably never even heard of but will soon.