Recently there have been two big, interrelated news stories coming out of the U.S. energy sector. The first is that the U.S. crude oil production continues to grow, and the U.S. has become the world’s largest producer of energy liquids. This growth has been led by the Permian Basin play in West Texas. The parallel story is that the Permian production is growing so fast, there is not enough pipeline capacity to get the crude oil and related energy commodities out of West Texas to refineries and export facilities. These energy transportation needs are permanent and energy infrastructure companies are racing to provide additional capacity.

The problem now in the Permian is that all the take away pipelines are full, production continues to grow, and producers are scrambling to get their crude oil, NGLs, and natural gas out of the Basin. The ready solution is to truck the oil, which costs $10 to $20 per barrel, which is much higher than the $1 to $3 per barrel pipeline fees. That is why Permian crude oil is trading for up to $20 per barrel less than the West Texas Intermediate (WTI)_benchmark crude oil price. It is easy to see why the Permian energy producers are desperate for new pipelines to be built to transport oil and other energy commodities out of the Permian.

The energy midstream companies are moving in to build new pipelines and natural gas processing facilities. Natural gas from the wells must be processed into the natural gas used to heat homes and generate electricity, and into NGLs, which are used for a range of industrial purposes. It can take months to years for energy infrastructure assets to be built. Here are three companies with a head start on their peers and when new Permian assets come on line with increase the dividends paid to investors. 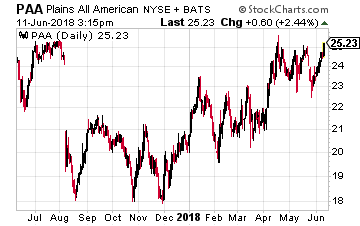 Plains All American Pipeline LP (NYSE: PAA) is a $30 billion enterprise value MLP focused on crude oil pipelines and terminals. Plains has focused on the Permian and is investing $1.6 billion in growth capital to expand its crude oil gathering and pipeline takeaway capacity in the Basin.

The company is expanding capacity on its Sunrise pipeline, which goes from the Basin to Cushing, OK. Also, the Cactus Pipeline from West Texas to Corpus Christi is being doubled with a second parallel pipeline. In total, Plains will increase its tariff volume from 3.24 million barrels per day at the start of 2018 to 3.8 million barrels in early 2018.

Plains provides gathering, intra-basin pipelines, and long haul pipelines, which allows the company to often collect several fees on a single barrel of oil. This MLP restructured its finances in 2017, including a 45% distribution reduction.

The company is now funding growth out of free cash flow and is expected to resume distribution growth in 2019. PAA yields 4.9%. 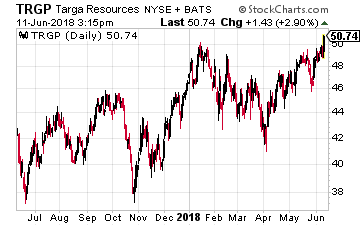 Targa Resources Corp (NYSE: TRGP) is an $11 billion market cap energy midstream company focused on the gathering, processing, transport and export of natural gas liquids (NGLs). These energy liquids are a big part of the value process of energy production in the Permian, North Texas and Oklahoma.

Targa is a major NGL player in all three regions. Management states that 75% of the company’s announced growth capital spending is going to Permian related projects. These include nine NGL processing plants and a new pipeline to move NGLs from West Texas to the Gulf Coast. New facilities will start coming on line this quarter and continue to start operations facility by facility through early 2020. The company forecasts 40% EBITDA growth between now and 2021.

The TRGP dividend has been level since late 2015. I expect dividend increases to start in 2019. The shares yield 7.4%. 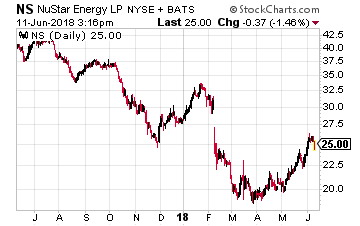 NuStar Energy LP (NYSE: NS) is an MLP whose business operations are a balance of pipelines and storage facilities for both crude oil and refined energy projects. In May 2017 the company acquired an integrated crude oil and transport system in the heart of the Permian Basin.

Throughput in the NuStar Permian system has increased by over 100% since the acquisition. EBITDA on the system is forecast to double from here to 2020. The company has initiated a joint venture new crude oil pipeline to transport oil out of the Basin.

Currently the NuStar general partner interests are held by a publicly traded company, NuStar GP Holdings, LLC (NYSE: NSH). The companies have announced that NSH will be merged into NS, eliminating the general partner interests and added expense for the MLP. This should allow the company to increase distributions to investors at a faster pace. NS currently yields 9.5%.