Last week I hosted an online session for my Dividend Hunter newsletter subscribers with InfraCap co-founders Jay Hatfield, CEO and Portfolio Manager and Edward Ryan, CFO and COO. During the hour long discussion we covered MLP investing and the changes to the high-yield InfraCap MLP ETF (NYSE: AMZA).

In January, AMZA announced a dividend policy change, going from quarterly to monthly and reducing the overall annual rate. As a result, the AMZA yield went from over 20% down to 15%. The move will benefit investors in the long term, but I wanted to get Jay and Ed in to discuss the different aspects of managing AMZA with my newsletter subscribers. The following is from my notes on the session.

The discussion started with details on valuations in the MLP space. It was shown on the presentation slides that compared to historical values the MLP yield and yield spread over BBB rated bonds are relatively high, which indicates MLPs are undervalued on historical standards.

The yield for the Alerian MLP Infrastructure Index (AMZI) is just under 8%, while REITs are yielding about 4.7% and utilities are at 4.0%. The slides on Enterprise value (EV) to EBITDA and Debt/EBITDA show that MLPs have as a group fixed their financial issues that caused business stress when energy prices crashed in 2015.

I asked Jay to discuss why he liked Energy Transfer Partners LP (NYSE: ETP) as the largest holding in the InfraCap MLP ETF (NYSE: AMZA). He discussed how ETP had become undervalued due to mechanical selling. When ETP merged with Sunoco Logistics, ETP was suddenly overweight in index tracking MLP funds. These index funds were forced to sell ETP to become balanced with the MLP indexes they are committed to mirror. Then Alerian put a 10% weighting cap on MLPs in the AMZI, and funds tracking that popular MLP index were again forced to sell ETP units to stay in line with the index weightings. The result is that Jay believes ETP with its 12% yield is very undervalued and has lots of upside potential from here.

We discussed the fact that MLP market values are highly influenced by the swings in energy commodity prices, especially crude oil. At the same time, both crude oil and natural gas production in the U.S. continue to grow.

Crude oil production growth is decreasing the need for oil imports and the increase in natural gas is being absorbed by the shift to gas to produce electricity, new chemical plants being built in the U.S. and the recent launch and growth of LNG exports. These charts show the production growth. It is this growth that produces the revenue growth for midstream MLPs. It was noted that MLPs increased distributions by 1.5% for the 2018 first quarter, which puts the sector on path for 6% annual distribution growth. 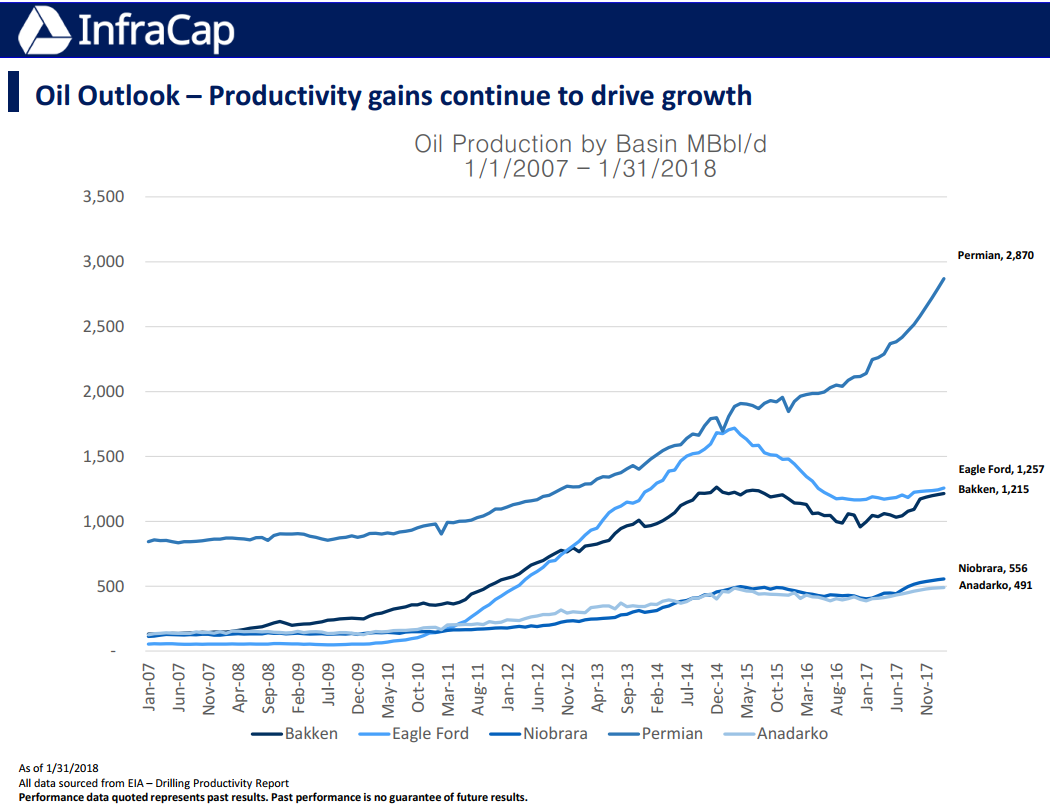 Now to the topic I think most want to hear about, the AMZA dividends. Ed and Jay discussed how during the last year, they were getting large purchases of new shares just before the ex-dividend date. As a result, they would have to immediately pay out some of the new capital as dividends. This left less capital to invest in MLPs to support the future dividends on new and existing shares.

With MLP values declining in 2017 it became very difficult to support both the dividend rate and the NAV (share value). Despite the challenges, AMZA did outperform the AMZI in 2017. The new dividend rate of $0.11 per share and monthly payment are intended to both continue to pay a very attractive yield and allow the NAV to grow.

The new dividend rate gives AMZA a 15% yield. The distributions from MLPs owned by the fund account for the first 10% and the fund’s call selling program will bring in the other 5%. Jay expressed confidence the management team could produce 5% cash flow from option selling and still grow the NAV when MLP values move higher. Ed and Jay also noted that the 5% figure will stay the same as the NAV increases. This means that if AMZA moves up to $10 or $12 per share, they will be able to generate higher cash per share from the options program. This fact plus the distribution growth in the MLP sector gives the potential for future dividend growth from AMZA. Nothing was predicted, and much is dependent on MLP values.

Taxes on dividends were discussed. Since MLP distributions are classified as non-taxable return of capital, the two-thirds of the AMZA dividend from the MLP distributions will be ROC. The one-third from the options selling program will come through as qualified dividends. Ed noted that future dividends should end up close to the two-thirds/one-third tax characteristics with the new dividend program. About taxes, Ed noted that the new tax law and lower corporate income tax rate provides a higher relative benefit to MLP funds compared to individual MLP investments.

Once again President Trump has brought to the fore the sorry state of infrastructure in the United States, which is the end result of decades of neglect from governments on all levels.

The report did not exaggerate. You need to look no further than the 2017 report card on infrastructure from the American Society of Civil Engineers (ASCE). It gave an overall grade of D+ for U.S. infrastructure, continuing the persistent D grades seen since 1998.

This is a serious matter if we want to have a 21st century economy. As the ASCE report stated, “The cost of deteriorating infrastructure takes a toll on families’ disposable household income and impacts the quality and quantity of jobs in the U.S. economy.” This is a true statement because infrastructure effects how efficient and productive companies are, which in turn effects the country’s GDP.

The ASCE report estimated that through 2025, every U.S. household will lose $3,400 a year in disposable income thanks to infrastructure deficiencies. As a whole, the ASCE estimate is that the U.S. economy will lose almost $4 trillion in GDP by 2025.

The problem is that to fix our country’s infrastructure woes a lot of money will be needed. And that’s where the President’s proposed plan falls down.

The target for his infrastructure plan has been raised to $1.5 trillion, but the federal government will only kick in $200 billion over a 10-year period. In Texas, they would call that plan “all hat and no cattle.” Keep in mind that we have an almost $5 trillion shortfall in infrastructure, according to ASCE. Apparently, the days of federally-funded projects like the Hoover Dam and the interstate highway system are long gone.

One major flaw in the Trump plan is that it expects greatly increased contributions from cash-strapped cities and states. These entities already furnish the bulk of government spending on infrastructure, including three-quarters of the national spending on transportation and water systems.

States’ ability to borrow what’s needed to fund very large, multi-decade infrastructure projects is limited. And most states will be wary of raising taxes, since the Trump administration’s new tax plan limits the ability to deduct local and a state taxes from federal tax bills.

But what about the much talked about public-private partnerships?

The Wall Streeters sitting of hundreds of billions for infrastructure investments gave Trump’s plan a cold reception. And it’s not just because of doubts about the politicians on the local and national levels.

FYI – there was a record $33.7 billion raised last year for North American infrastructure investments. The total since the end of 2015 is about $70 billion.

As pointed out by the Wall Street Journal, one prime example is the Blackstone Group L.P. (NYSE: BX). It has plans to raise as much as $40 billion (not included in the previous figures) for U.S. infrastructure investments. But a mere 10% will be devoted to public infrastructure assets. The story is similar with almost all infrastructure funds.

Despite our country yet to get its act together on infrastructure, it still can be a good sector for you to invest in. You just have to pick and choose carefully. Here are two examples.

The company at the top of my infrastructure investment list has to be Caterpillar (NYSE: CAT), the world’s leading manufacturer of construction and mining equipment. It also makes diesel and natural gas engines as well as industrial gas turbines.

A big plus is that Caterpillar is truly a global company with more than half its sales generated outside the U.S. In its latest quarter, CAT reported a 34% rise in sales globally, with strength across all regions. This was a level last seen in August 2011. The company specifically noted that in North America the gains were led by construction. Adjusted earnings surged 160% in the quarter.

As of the end of fiscal 2017, Caterpillar’s order backlog was at $15.8 billion, driven by higher backlog in its resources-related industries business. The strong global macroeconomic background led management to guide its adjusted earnings per share to a range of $8.25-$9.25 for fiscal 2018. The midpoint of the guidance range reflects 27% year over year growth.

If you are looking for more pure U.S. exposure, there is Martin Marietta Materials (NYSE: MLM), which is a leading supplier of construction materials (such as aggregates) for highways, infrastructure and other building projects.

The company posted impressive results in the latest quarter, beating consensus estimates on both earnings and revenues. Adjusted earnings were up 21.3% from the year ago quarter to $1.88, while revenues were 2.3% higher to $970.5 million. For 2018, management guided revenue estimates to between $4.2 billion and $4.4 billion.

And if anything happens on the public infrastructure front, MLM is a sure beneficiary. Infrastructure construction accounts for about 37% of the company’s total aggregate product line shipments.

So even if the politicians dither (as usual), infrastructure investments can still be money-makers for you.