The stock market has turned volatile, and the income stock sectors feel downright unwelcoming. Since I have contact with thousands of investors I learn there are a thousand different situations in the market. The investor who bought at a higher price doesn’t like to see the share price drops in his portfolio. Another is expecting a cash infusion next week and hopes prices will stay down until she gets the money and can load up on shares at the current low prices.

I tell my Dividend Hunter readers that you can’t earn dividends unless you own shares of dividend paying stocks. Trying to time the market can leave an investor without any shares that are paying dividends. It takes a somewhat different mindset to get away from worrying about share prices and to focus on building an income stream. The good part is that when the stock market corrects, or becomes volatile, or forgets which way is up, the income investor will continue to rake in dividends. In a choppy market I like to add to those stocks that hit my “sweet spot” combination of current yield and dividend growth.

In a flat or volatile market, cash dividends are real returns, so a higher yield can be viewed as a cushion against share price movement. Dividend growth is a factor that can make a stock more attractive even if the market is not in a price appreciation mode. You can find dividend stocks with low yields, such as 3% or less and double digit annual dividend growth. At the other end of the spectrum are the 10% yield stocks, but with little potential for dividend growth.

If total stock market returns go flat, I recommend going for the middle ground. Find stocks with attractive yields. I the current market the range would be 5% to 7%. These stocks need to have recent history and prospects of mid to high single digit dividend growth. The dividend payments give you solid cash returns, and the dividend growth prospects can give support to share prices in a volatile market. In the long run, this combination should produce total annual returns in the low double digits.

Here are three stocks that fit the criteria discussed above: 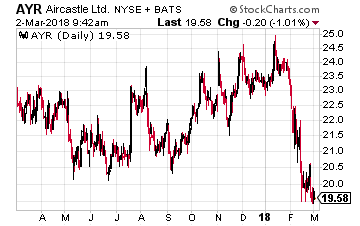 Aircastle Limited (NYSE: AYR) owns approximately 220 commercial aircraft that are leased to 81 airlines around the world. Aircastle must be nimble to adjust for changing needs for aircraft type and client airlines financial conditions. For example, in 2017, Aircastle purchased 68 aircraft and sold 37. The business is very profitable. The company generated a 15% return on equity last year and reported adjusted net income of $2.15 per share.

The current dividend rate of $1.12 per share per year is well covered by net income and free cash flow. In recent years, Aircastle has been increasing the quarterly dividend by 7% to 8% per year. The foundation of Aircastle’ s results is the steady growth in international air traffic, which appears to be immune to global economic conditions. The shares currently yield 5.75%. 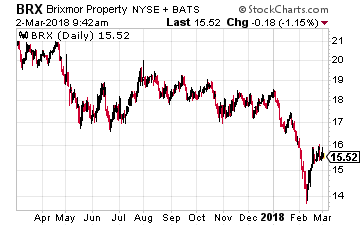 Brixmor Property Group Inc (NYSE: BRX) is a real estate investment trust (REIT) that owns community and neighborhood strip malls. These malls are typically anchored by a grocery store and the tenants are often in businesses that are largely immune from ecommerce sales competition, or in recent terminology, “being Amazoned”.

The company’s board of directors recently shook up the management team, with the goal of more active rental rate management. The REIT’s major tenants are financially strong, but there is a group of weaker tenants with absurdly low rental rates. Replacing these tenants will allow Brixmor to grow revenue and free cash flow. The company should be able to continue its recent history of 5% to 6% dividend growth. The BRX shares yield 7.1%. 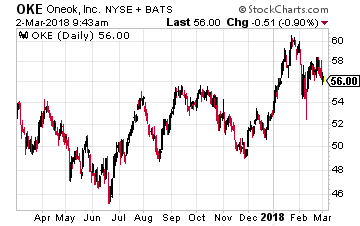 The growth in gas production has been lost in the news about the U.S. becoming the world’s largest crude oil producer. Oil wells also produce natural gas and NGLs. ONEOK is the primary, and often the only, company gathering and processing gas in the major crude oil plays.

The company expects to grow its dividend by 8% to 10% per year. OKE currently yields 5.5%. 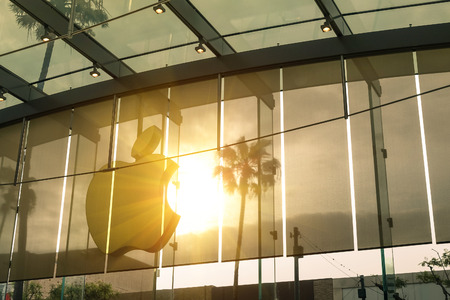 More disruption is headed to the healthcare industry, challenging the power of the incumbents in the sector. I’ve already told you about the recently announced effort by JPMorgan, Warren Buffett’s Berkshire Hathaway and Amazon.com (Nasdaq: AMZN) to get into the healthcare space. Their aim is to create a not-for-profit healthcare company to try to lower the cost of healthcare for their collective one million employees.

Now, it seems that Apple (Nasdaq: AAPL) is also getting serious about its push into healthcare. The hint about Apple’s seriousness came at a keynote speech by CEO Tim Cook in September 2017 when he said the sector is one where Apple can have a “meaningful impact”.

At the recent shareholders meeting, Cook again was critical of the healthcare system in the United States. He said it “doesn’t always motivate the best innovative products”. Healthcare companies are designed based on reimbursements rather than the patients’ best interests, he said.

Cook said that Apple sees healthcare and wellness as a core part of its app, services and wearables strategy. Cook added that the healthcare market makes the smartphone market look small by comparison. He’s right – with over $7 trillion in healthcare spending annually (about half of that in the U.S.), it’s already about 10% of global GDP.

And think about Apple’s built-in opportunity… the company has over 85 million iPhone users and over one billion Apple devices are actively being used around the globe. That is a number than dwarfs what any health insurer or healthcare provider can boast.

Apple has been slowly building its push into healthcare over the past several years.

Apple’s first foray into the health segment occurred in 2014, with the release of the Health app and HealthKit. Then in March 2015 came the release of ResearchKit and the Apple Watch. Apple has used its HealthKit and ResearchKit software and data platforms to connect users’ health information across third-party apps and into clinical research projects.

The move by Apple into health accelerated in 2016 with the purchase of the digital health company Gliimpse, along with some health-related hires such as experts in remote health monitoring. In 2017, Apple joined with start-up Health Gorilla to advance its quest to turn the iPhone into a comprehensive repository of users’ electronic health records. 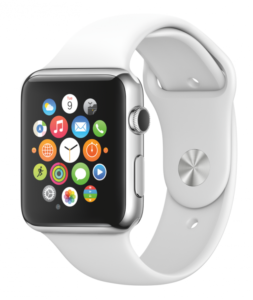 Today, Apple is working with Stanford University on a study to see if the Apple Watch’s sensors can detect heart abnormalities. Apple is also working on a number of other health-related solutions, usually using the Apple Watch, such as non-invasive blood glucose monitoring.

And with an upcoming software update, iPhone owners will be able to download their electronic medical records directly from some US hospitals. In January, Apple announced it was teaming up with 12 major hospital systems, such as John Hopkins, to enable patients to see all of their medical records on their iPhone.

And now Apple is taking an even bolder step…

Last month came word that Apple was preparing to launch a network of medical clinics for its employees and their families. The network is named the AC Wellness Network and is scheduled to launch this spring. On Apple’s website, it is described as an “independent medical practice dedicated to delivering compassionate, effective healthcare to the Apple employee population”.

This move to open its own medical practice doesn’t mean Apple isn’t willing to work with some of the incumbents in the sector. Here are just several examples:

In November, the company came to an agreement with Aetna (NYSE: AET) to distribute more than 500,000 Apple Watches to its customers in 2018, broadening a pilot program that gave Apple Watches to Aetna employees. The special Watches will be loaded with apps co-developed by the two companies to do things like reminding users when to take their medications.

The goal is to, when the technology is perfected, to give the Watch to all of Aetna’s health-insured population. This Apple strategy strikes me as sharing parallels with Apple’s initial strategy of using carriers to subsidize the cost of the initial iPhone, essentially using the carriers as distribution channels. 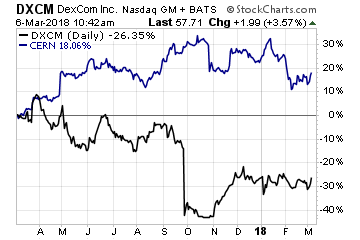 Apple has also teamed up with several medical device makers to create iPhone-enabled devices, including Dexcom (Nasdaq: DXCM) for glucose monitoring and Cochlear (OTC: CHEOY) for hearing aids. As software becomes more and more important for medical device companies going forward, Apple could be positioning itself as an analytics, software, and patient health platform for these companies to plug into rather than having to build these capabilities themselves.

And at this week’s HIMSS18 annual conference, Apple is teaming up with Cerner (Nasdaq: CERN) to showcase to make health care records accessible in the Apple Health app. Cerner will also be offering a look at virtual health solutions that empower individuals to manage their health via telemedicine and remote monitoring technologies as well as intelligent solutions for hospitals as they adjust to rising costs and new technologies.

The bottom line for you is that technology is finally changing healthcare as we know it. The one sector where costs have continued to inflate every year looks to be set for technology to have its deflationary effect.

That means the middlemen companies in the sector – with the fat profits – are going to be going on a ‘diet’. In other words, profits will be squeezed as Apple, Amazon and others move in.

Related: Sell These Healthcare Middlemen About to Get Amazoned

Healthcare could end up being a major part of the services business for Apple in a few years. Bad news for the incumbents, unless they have smart managements like the aforementioned companies and are teaming up with Apple and other technology firms.

All those in the health field now need to remember the old saying, “An Apple a day…”

Get Your Hands on Stocks Growing Revenues (and Stock Prices!) Faster than Google and Apple

I’d like to reveal to you the blue chip stocks – one in particular – that could literally be worth millions of dollars to you over the next decade.

Revenue for one firm in particular is growing faster than that of Google and Apple, the darlings of Wall Street. Investors have watched the stock price shoot up over 100% this past year and we’re just getting started.

You need to get in this stock before April 1st (it’s closer than you think!).