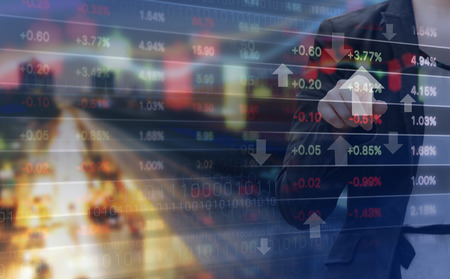 This week, we get the next installment of the FOMC meeting – the big Fed meeting where they decide what to do with interest rates.  The meetings are a bit more interesting these days since rates are going up and some sort of definitive actions tends to take place.

Keep in mind, we had several years where the only thing investors were concerned about is what the Fed was doing with QE (Quantitative Easing).  Interest rates weren’t even in the picture at that point.  These days, we’re back to some level of normalcy, with rates slowly heading higher.

The market is expecting the Fed to raise rates by a quarter point.  According to the CME’s Fed Fund Futures, there’s about a 90% probability of it happening. That part isn’t really what investors will be focused on.

Instead, it’s what the Fed says about the economy and inflation that will really be the primary focus of the market.  Of course, inflation concerns are a big part of why we had the early February selloff.  It’s not entirely out the question that the Fed says something which will subsequently send stocks much lower (or much higher).

What the central bank sees in the economic data, especially in regard to inflation statistics, should go a long way towards defining their rate increase strategy this year.  In other words, it could very much be an important FOMC meeting.  It could also be a complete snooze fest.

Regardless, plenty of traders will be positioning themselves in various assets in preparation of the announcement.  One popular instrument for trading the Fed meeting is iShares 20+ Year Treasury Bond ETF (NASDAQ: TLT).  Bond prices are based almost entirely off of interest rates and interest rate expectations, so action in TLT makes sense ahead of the FOMC meeting.

While a quarter point increase is already built in to the market, further increases may or may not be accounted for.  If investors believe interest rates could go higher faster than originally anticipated, bond prices could take a dive.

At least one trader in TLT is betting on treasury bonds having pretty decent downside potential over the next month. 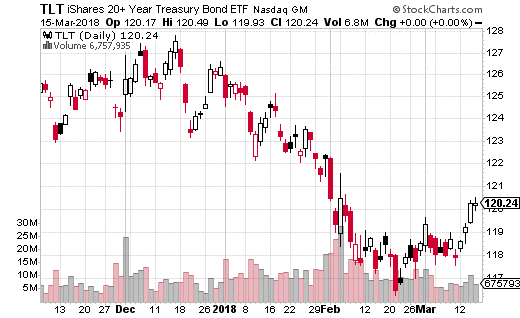 This is exactly the type of trade I’m a big fan of.  It has minimal risk with very strong return potential.  It’s the kind of trade I frequently make in my options trading service. The timing suggests it’s related to expectations of higher interest rates post-FOMC meeting, which makes perfect sense.  In fact, there’s nothing wrong with doing an exact copy of this trade in your own trading account. 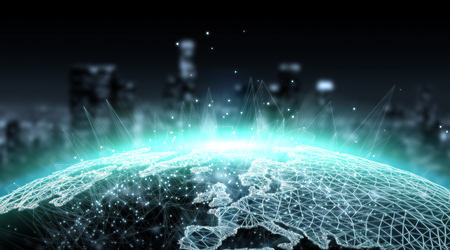 But cryptocurrencies can do so much more.

Adam and I have talked a lot about the gains that have been made (and the gains likely to come).

We’ve also talked about how nice it is to finally have a viable alternative to fiat money (aka traditional currency).

Cryptocurrency prices rose so quickly in 2017 (more than 10X) that progress made in the equally exciting blockchain technology has been drowned out.

The profits are real… and happening now. It’s definitely created a buzz.

But what about the technology itself?

Well, it’s developing about as well as can be expected. Every day, new advances are announced.

Developers of TrueBit, a smart contract that scales transaction computations through interactive verification, were able to move Doge coins to the Ethereum network and back again. Once the technology is fully developed, it could allow a degree of scalability currently out of Ethereum’s reach.

American Express has applied for a patent to use blockchain tech to boost transaction speed.

None of this is surprising.

There are thousands of developers around the world working on new blockchain technologies. The companies that employ them announce their breakthroughs with as much fanfare as possible, in hopes of attracting both funding and top-caliber engineers to their projects.

Yet it seems that cryptocurrency is garnering as many detractors as enthusiasts and eager investors. Here are three rules to explain why this is happening.

Rule No. 1: The more transformative a technology, the more skepticism it engenders in its early days. Breakthrough technology is hard for most people to understand and accept. What’s more, it doesn’t come fresh out of the lab fully developed. New products are greeted with disbelief or bemusement, as if they’re toys. (See my article here for more of my thoughts on this.) Past examples include Skype, mobile phones, iPads and desktop computers.

It’s why bitcoin wasn’t taken as seriously as it should have been when it first appeared on the scene. And it’s still the case today!

Rule No. 2: It takes time for external technological forces to catch up. An ecosystem needs to mature around any breakthrough technology. Thomas Edison invented the lightbulb in 1879. Two years later, he patented a system for electricity distribution. A year after that, the first few thousand houses in New York City were electrified. And efficient scaling was still years away.

Because prices and fees fall, network effects kick in and accessibility improves. Basically, technology adoption is sluggish at first, but it gains speed over time.

But that is neither a smooth nor a linear process. I’m a big believer in an adage known as Amara’s law…

Roy Amara was a co-founder of the Institute for the Future in Palo Alto. He describes a typical pattern with new technologies as “a big promise upfront, disappointment and then slowly growing confidence in results that exceed the original expectations.”

This is true, he says, of computation, genome sequencing, solar power, wind power and even home grocery delivery.

A typical comment I hear: “Lots of people invest in it, few use it.”

Of course, I can say the same thing about crowdfunded startups that have thousands of investors but little or no sales to speak of.

That doesn’t mean a thing to early investors. It comes with the territory. But we do expect the technology to work… and eventually make a profit.

We have legitimate “proof of concept” claims from blockchain technology companies, but we’re so early in the life of this technology that we don’t know for sure if it will be put to work on a massive scale… or even if it will work at all.

It goes to show just how nascent the technology in this current period is.

We’re basically in the experimental, pre-commercial phase of blockchain technology. Lots of things are being tried and tested in controlled trials, but very little is being trotted out for actual use. Mass consumption is still years away.

Most of you probably wonder if you’re too late. Ha! You should be concerned whether you’re too early.

The good news: You’re neither. I’m very bullish on the long-term outlook for blockchain and cryptocurrency investments. We’re at the very beginning of a multidecade phenomenon.

I’m convinced that dozens of industries will be reinvented by distributed ledger technologies and decentralized digital-asset-backed protocols. The change will be massive and global… and will develop into a multitrillion-dollar space. In terms of scale and impact, it will be similar to the internet, which transformed EVERYTHING.

The extraordinary returns come very early in the cycle. Your timing couldn’t be better.

Of course, it all has to play out. And maybe it will never amount to anything (though I doubt that very much).

My advice? Invest a small percentage of your savings – enough to make a difference in your life if the cryptocurrency/blockchain space overcomes current skepticism and gains broad acceptance, as we expect it to.