Well this past week has certainly been interesting.  After a pretty terrible week for stocks, the Dow Jones Industrial Average is now down 5% for the year and the S&P 500 is down about 3%.  This certainly isn’t the year most investors expected, especially after the market reacted so positively to the reduction in corporate taxes.

I’ve said many times before that politics usually only has a very short-term impact on the stock market.  However, the rules change if politics end up impacting the economy, or the potential for the economy to grow.

Tax reform was generally viewed as a positive for the economy since companies planned on using tax savings to buy back shares (or possibly increase dividends).  On the other hand, the recent tariff announcements have had the opposite effect.

From a global perspective, tariffs are almost always a bad idea.  They can result in trade wars which end up raising prices for everyone involved (and for those not involved as well).  The steel and aluminum tariffs were already causing some issues in certain sectors.  Now, the introduction of new tariffs against China could create problems across a variety of industries.

The market clearly does not like the idea of a trade war.  I already mentioned how the major indexes are down.  Volatility is also way up, with the VIX (S&P 500 volatility index) up from a low of 17 last week to 25 on Friday’s close.

We barely even saw 15 in the VIX prior to this year.  Now, we’re experiencing higher-than-20 levels on a semi-regular basis.  It seems investors are really worried about a continued market correction.

A trade war is a very bad thing for the economy – but it tends to take a while to have any impact.  Over the short-term, the panic selling we’ve been seeing doesn’t make any sense to me.  I think the selling is overdone and volatility is too high. 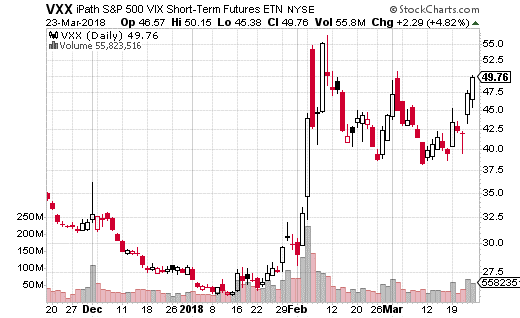 A risk-reversal is a synthetic method for getting long or short VXX stock.  In this case, the trader bought puts and sold calls at the same strike (47) in the same expiration (April).  This is the equivalent to going short VXX at that strike, except it expires in April.

With VXX at $47.75, the trader purchased the April 20th 47 puts while selling the 47 calls for a $0.65 credit.  To simply what can happen with this trade, basically above $48 in VXX loses $500,000 per dollar while below $47, it gains that amount per dollar.  It’s obviously quite risky, so the trader must have strong conviction that short-term volatility is dropping soon.

I agree that we should see a reversion in VXX in the coming weeks.  However, this trade is far too risky for my taste.  Instead, a basic put spread makes more sense to me.  For example, using the same April 20th expiration and the same starting strike, we can buy the 42-47 put spread for about $2.00 (with VXX around $49.50).

That means you’re buying the 47 strikes and selling the 42 strike.  Your max loss is just the $2 you spent, which also makes the breakeven point $45 in VXX.  If VXX goes to $42 or below by April expiration, you make $3.  That’s a 150% returns on an event which seems like it has a good chance of happening!